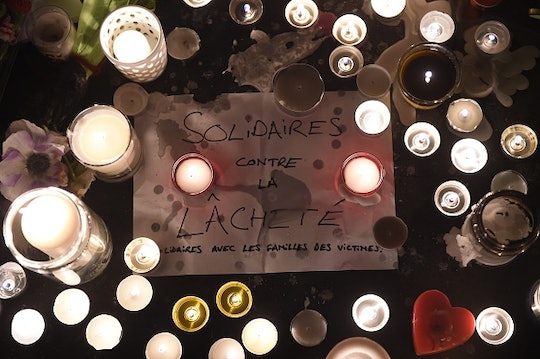 In the wake of yesterday's attacks in France, people around the world are paying tribute to Paris through artwork, music, and other meaningful symbols of support. Yesterday, multiple gunmen and attackers armed with explosives attacked Paris, leaving more than 120 people dead throughout the city. The shots were first heard near La Petit Cambodge, a restaurant in the 11th district, as well as outside the Stade de France, where a soccer match between the French National Team and German National Team was being held.

In addition to the shootings and explosions, a hostage situation took place at the Bataclan Concert Hall during an Eagles of Death Metal concert. According to Julien Pearce, a radio reporter who escaped the Bataclan, two men shot into the crowd with AK-47s, and began killing wounded victims execution-style. More than 100 people were killed in the slaughter before police lead a raid on the concert hall that took out two of the hostage-takers and freed the hostages.

Despite initial speculations over who led the attacks on Paris, ISIS has since claimed responsibility for the attacks. The terrorist organization released an audio and text statement on social media, in which they took credit for the attacks and noted that, "France and those who follow its ways should know that they remain at the top of the Islamic State hit list."

But the people of France and their supporters, including President Barak Obama, continue to show strength during this tragedy. Since the attacks, an outpouring of support has been shown to France on social media. People around the world have banned together to find ways to help the victims of the Paris attacks. The hashtag #PorteOuverte took over Twitter to offer a safe space for those who were stranded in Paris. People have been added a French flag filter to Facebook profile pictures to show that they stand with France. But the support stretches beyond social media. All around the world, people have hosted vigils, sketched symbolic artwork, and painted their French pride in the streets to show that France is not alone at the time, and never will be as long as there's humanity.