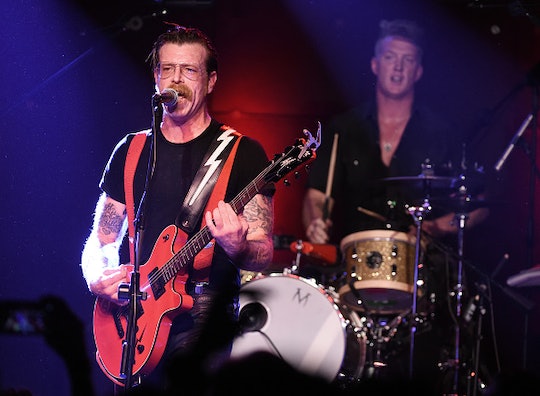 Earlier this evening, as part of numerous attacks on Paris, a hostage situation occurred at the Bataclan Concert Hall during an Eagles of Death Metal performance. Although hundreds of people were held captive in the venue, members of the rock band escaped and were led to safety.

Shortly following the start of the takeover, Eagles of Death Metal posted to social media that they were working to "determine the safety and whereabouts," of the band and crew members. But The Washington Post reported that the members of Eagles of Death Metal are safe, as well as their crew. Emily Dorio, wife of the band's drummer Julian Dorio, spoke to the post confirming the band's safety.

"We are just holding our breath and saying prayers for everyone," Emily, who was not present during the attacks said. said "He called to say that he loved me and he was safe. Everyone on stage was able to get off."

The hostage situation, which left over 80 people dead, ended after police raided the venue and killed two assailants. French police say that all the attackers are dead following the terror attack. (Update: Authorities also confirmed that seven of the assailants have died. ISIS has claimed responsibility for the attack, which has killed over 120 people.)

The takeover of the Bataclan Concert Hall was just one in a series of attacks on Paris tonight. Earlier in the evening, six shootings occurred in multiple locations throughout the city and three explosions occurred outside the Stade de France. More than 100 people have been reported dead from the attacks, and French President Francois Hollande has closed the French borders in order to keep citizens safe.

This evening's concert, which was a sold-out event, was part of a European promotion for the band's new album Zipdown, which was released in October. Formed by Jesse "Boots Electric" Hughes and Joshua "Baby Duck" Homme in the late '90s, Eagles of Death Metal launched their debut album, Peace, Love, Death Metal, in 2004. Despite their name, the American-based band performs rock music.