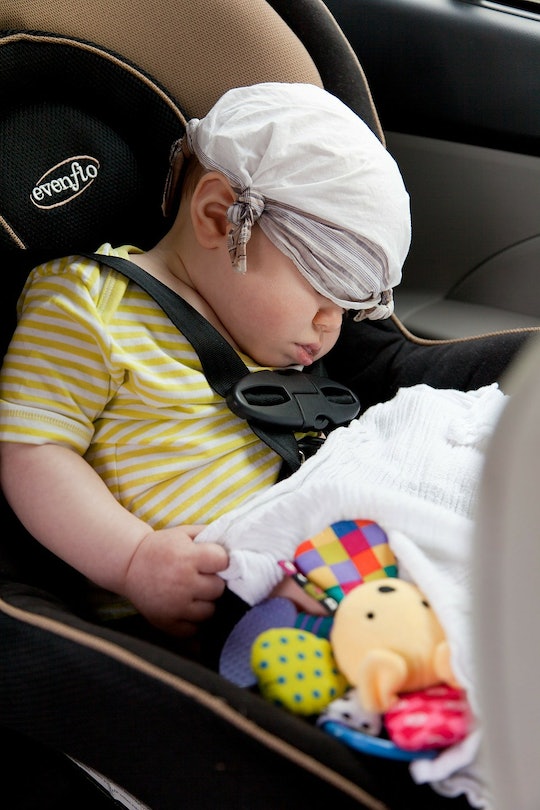 Most of the caregivers who have tragically and heartbreakingly left children in parked, hot cars where they eventually die of heat stroke, have been loving, well-intentioned caregivers who did so inadvertently. But this onetime mistake has terribly irreversible consequences for far, far too many families each year, even as news reports of this occurring instill fear in parents' hearts. Thankfully, emerging technology is about to make parents feel a lot better about taking their little ones on errands with them, thanks to a new car seat that alerts parents if their child is still in the car, once the engine is shut down.

For many working, harried, distracted, or out-of-routine guardians, the Evenflo SensorSafe Car Seat may be a godsend. While most tricks and strategies for making sure parents don't leave their kids in the car — like storing an essential item such as a cellphone in the back sear with them or instructing daycare providers to call if a child is a no-show — this car seat incorporates some potentially lifesaving gadgetry into the effort.

According to Consumer Reports, this car seat is still relatively simple to use, though: A chest clip on the seat communicates with a receiver connected to the vehicle, which will use gentles chimes to alert the driver that a child is in the seat when the ignition is turned off. When it works the way it's supposed to, it makes it a lot less likely that the driver will head to his or her destination sans baby.

According to the nonprofit advocacy organization Kids and Cars, approximately 37 children die after spending time alone in a parked car each year. The group's founder, Janette Fennell, has long been a proponent of introducing this kind of technology to vehicles in an attempt to save lives. "You can't buy a car [today] that doesn't turn your headlights off for you or remind you to turn off your headlights," she told CNN last year. "And the question just begging to be answered is, who has decided it's more important not to have a dead car battery than a dead baby? And I don't say that to be harsh or sensational. It's just a fact."

The Evenflo SensorSafe Car Seat could indeed help to achieve KidsandCars' mission of reducing and eliminating these types of deaths, which usually claim children ages 3 and younger as their victims. But Consumer Reports did discover some important caveats in its testing of the product, like that the child in the seat must weight at least 30 pounds and the vehicle must be a 2008 model or newer for the device to work properly.

With those limitations in mind, those who regularly cruise with small children in tow can purchase the Evenflo SensorSafe Car Seat at Walmart for $149.00. It's still smart to make a habit out of always checking to see whether there's a child in the car before leaving it, because one of the most frequently cited reasons for leaving a kid is a change in routine. When it comes to children's safety, every extra precaution is an important and necessary one.