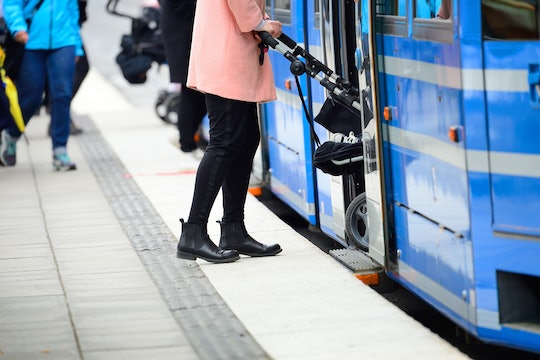 Public transit has long been seen as a slightly tricky aspect when it comes to car seat safety. Parents who live in urban centers often rely on the subway system, buses, and taxis to transport their kids, but seeing a child in a car seat on a bus, for example, is a relatively rare occurrence. Same with taxis, and the same goes for a subway car. One has to wonder if there are actually car seat rules for public transportation, and what happens if you don't follow those rules?

While there are fairly strict rules regarding car seat safety in private transportation, rules for public transport tend to be significantly murkier. First of all, subway cars and bus seats don't even have seat belts, so how exactly is one expected to use a child restraint in that situation? Short answer? You can't, which means there are no laws regulating the use of a car seat on the subway, the train, or even the bus, as BabyCenter explains.

But that doesn't mean you shouldn't consider extra precautionary measures when it comes to using public transport with your little one. Because, really, traveling with children is stressful enough without adding that extra layer of worry about whether they'll stay safe on the road. So, here's what you need to know.

Taking the subway or the train is actually a very safe way to travel, according to Babylist, because they are heavy, bulky, and would absorb the majority of the force of a crash if that were to happen. Child passenger safety specialist Stephanie Tombrello told the website that she recommends traveling with a combination stroller/car seat until your child reaches 40 pounds, because it's easier to maneuver a stroller than carry around a car seat. Not to mention the fact that a stroller can be folded when you are with older toddlers and they can sit beside you on the seat.

If you're planning on traveling in a crowd and are worried that space will be an issue, it might be a good idea to wear your baby, according to The Car Seat Lady. Especially on a bus where seats tend to be at a premium.

Combination stroller/car seats are incredibly efficient for taxis as well. While many states have exempted taxis from laws that require children to be properly restrained in a car seat — California being the exception, according to Parents — the reality is that your child should absolutely be in a car seat.

Traveling in a taxi means seat belts, loads of traffic, and potentially dangerous drivers. If you have a stroller/car seat with you, worrying about finding a taxi with a car seat won't be an issue.

The ride-sharing company Uber provides UberX cars equipped with car seats through its Uber Car Seat program, according to the company's website. Uber drivers will not allow children to ride in their cars without a car seat, but for an extra $10, parents can simply tap on the "car seat" option in their Uber app. Children must be at least 12 months old, 22 pounds, and 31 inches to use the car seat. The slight catch? Only one forward-facing car seat is provided, meaning traveling with multiple little ones could prove to be dicey — especially since the American Academy of Pediatrics strongly recommends that children remain in rear-facing car seats until they're at least 2 years old.

Lyft offers a similar car seat option for customers hoping to use its ride-sharing app, but only in New York City as of July, as Fortune reported. For an extra fee of $10, any child older than 12 months can use the Lyft car seat option (as the company does not feel the seat is safe for anyone under 1 year old, according to Forbes). On the company's website, it also states that its drivers are "happy to give kids a ride as well as adults as long as your children have the proper car seats that fit legal requirements in your state and city" and parents must "plan on providing your own car seat for children that require one."

At the end of the day, trying to arrange public transportation can be a tricky feat. But if it means being able to get from point A to point B with your baby in tow, it may be worth the extra effort.

More Like This
Watch An Exclusive Sneak Peek At PBS Kids’ New Bilingual Preschool Series Rosie’s Rules!
Nebraska Judge Rules Two Mothers Cannot Appear On Their Sons' Birth Certificates
McDonald's Is Going To Sell Happy Meals Just For Adults So We Never Have To Grow Up
What Parents Need To Know After DEA Issues Warning About "Rainbow Fentanyl"