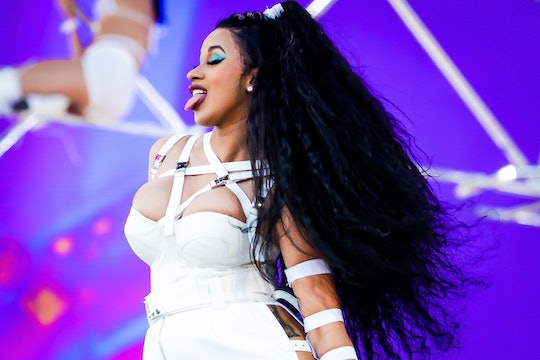 Cardi B Is Done Performing Until She Gives Birth, & It's An Important Reminder For Moms-To-Be

Cardi B has announced that this weekend's Broccoli Fest in Washington, D.C. may be the last time fans can see her live for a little while. On April 7, she confirmed rumors that she was expecting during a performance on SNL. Though it may come as a disappointment to some, Cardi B says she's done performing until she gives birth, and honestly, she deserves the time off.

People reported that in an Instagram video uploaded on Thursday, Cardi said her upcoming appearance at the music festival would be her last for a period of time, citing that it was getting harder to move as her baby develops. "You know, shorty keep growing and I be looking like I be moving and everything, but really, a b*tch can barely breathe," she said. “I can barely breathe right now. I’ve ate like six chicken wings, and I can barely breathe now.”

Cardi was scheduled to appear at a number of festivals throughout the summer, including Rolling Loud Festival, JMBLYA Festival, and New York City’s Panorama Festival. However, it seems that she will be bowing out of those appearances. Cardi also mentioned that fans can expect her to return in September for Bruno Mars' 24K Magic Tour, as she was previously scheduled to open for him.

Cardi followed the video with a post on Twitter in which she explained that though she is not going to be performing for a few months, that doesn't mean she's not going to be working. She shared:

On April 9, Cardi appeared on The Tonight Show and told Jimmy Fallon that being pregnant has made her more driven than ever. “I don’t know if it’s the strength of the fetus, but I have never felt so hungry to succeed,” she said, noting at the time that she was going to try her best to keep up with her hosting duties and performance dates. “I’m doing it all until I give birth."

In a later interview with Hot 97's Ebro in the Morning, she spoke candidly about pregnancy for the first time, and responded to those who were questioning whether she'd be able to keep up with both her career and parenthood. "Why can't I have both?" Glamour reported she said. "Why do I have to choose a baby or a career? A family or a career? What am I doing wrong?" She continued:

I'm 25 years old, and Imma say this in the most humblest way: I'm a millionaire. I'm established. The industry is never promised, but I know that if I make the right money move, I'm gonna always have money.

Be that as it is, it's completely understandable for Cardi to decide to take some time off to focus on her health and pregnancy. The Bump explained that though there is no "right" time to stop working — or to cut back on one part of your work, like Cardi — during pregnancy, what matters most is that moms listen to their bodies and do what's best for them and their child.

Earlier this month, Cardi announced her pregnancy during an appearance on Saturday Night Live. This is her and fiancé Offset's first child together. After the news was made public, Cardi's sister may have accidentally revealed the baby's sex, People reported, as she used the pronoun "her" in a congratulatory Instagram post, which has since been edited.

On April 19, Cardi B revealed that Offset had already named their child on the Ellen show, though she wouldn't say what the choice was. ("I'm gonna let him say the name since he named the baby," she said.) However, she did note that it was something relatively easy to pronounce. "Almost tricky, but when it comes out, it's like, 'ohhh,'" she described. After that interview, fans took to social media to share their baby name predictions, which included everything from "Carset" to "Offspring" to "Cardi C."

Though fans will undoubtedly miss her on stage this summer, it's understandable that Cardi has to focus on her priorities, and health always comes first.