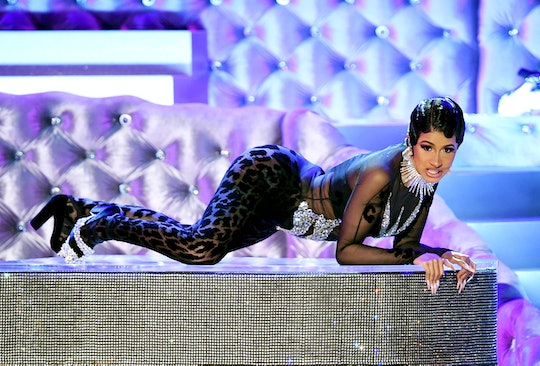 As if her red carpet look hadn't blessed us with enough comedy gold, Cardi B's moment on the Grammys stage was next level. It was so theatrical that Cardi B's Grammys performance led to even more hilarious memes. For better or worse, Twitter users had so much to say.

It was such a busy night for Cardi, who was up for five Grammy awards, according to Complex. The rapper's hit single "I Like It" garnered one of those nominations, but she opted to hit the stage for an energetic performance of "Money." She twerked all over the piano and the stage with tons of back up dancers. Thankfully, she'd changed out of her red carpet dress, because I'm pretty sure she would have hurt herself trying to bust moves in that thing.

Instead, she performed in yet another eye-popping look, this time featuring a fan of huge black feathers on her backside. Some people said it bore a striking resemblance to a peacock, and yet the jumpsuit she wore with it featured a leopard print. One Twitter user sensed a few eery similarities between the two over-the-top looks, and it does make wander you wonder if Cardi might be the world's biggest fan of The Little Mermaid.

One viewer was reminded of Cardi's infamous Twitter exchange with conservative TV host Tomi Lahren, in which the rapper threatened to "dogwalk" Lahren for insulting her, according to People.

Members of the K-pop boy band BTS were also in the house to watch Cardi B's performance. Twitter users got lots of laughs out of their various reactions, which seemed to rage from shock to awe to confusion and excitement.

At least one Cardi B fan didn't feel like there was much reason to stick around for the rest of the show once her performance was in the can. That's the trouble with the late Sunday night award shows — staying up to make sure you don't miss any dramatic moments leads to a very exhausting Monday morning.

Cardi B 2020? The democratic field is already pretty crowded, but she does have a pretty good grasp on politics...

Cardi B walked the red carpet with her on-again, off-again partner by her side, seemingly confirming that she and Offset are back together, according to Elle. The rapper was really into Cardi's performance, so despite their somewhat tumultuous past, I guess he gets a little credit for being a super supportive boyfriend (and fanboy).

Not everyone was ready to forgive and forget Offset, however, (there was that whole cheating scandal, detailed by TMZ) and they didn't appreciate seeing his reaction shots.

Offset was far from the only one dancing it out during "Money" though.

And apparently, Cardi's moves and her sexy jumpsuit might have inspired some people to hit the gym a little harder from now.

Now that her set is over, I can totally see Cardi needing a little time to rest and recover and finally slip into something more comfortable — being one of the most talked about performers of the night probably takes a lot out of you.