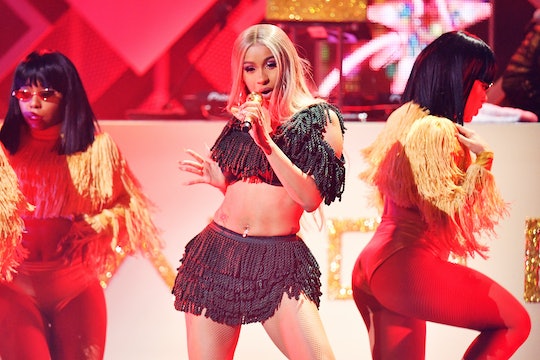 Cardi B cannot stop having all of the social media moments. Some of them are incredibly tough, like her recent split from husband Offset. But that girl knows how to bounce back and create better vibes for herself like no one else. Especially with her new album coming out and her little baby Kulture Kiari Cephus getting bigger and sweeter by the day. In fact, the rapper appeared to combine her two loves, her music and her baby, in her most recent work. Cardi B's new music video includes a special appearance, and Twitter is totally loving this empowering mom moment.

The "Bodak Yellow" singer released the video for her new song "Money" from her Invasion Of Privacy album on Friday. The video paid homage to Cardi B's past as an exotic dancer and, rather obviously, her interest in making lots and lots of money. Which I personally found sort of empowering, because why not get honest about wanting to make money if that's your thing? Why is that always such a shameful little secret? That's the thing about Cardi B: Like her or not, she is exactly who she says she is 100 percent of the time. And perhaps never more so than in her "Money" video. 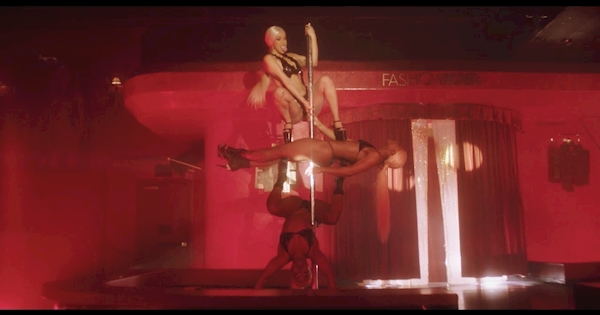 While people are already loving the video (it has amassed more than 7 million views on YouTube in the first day alone), there's one aspect that was of special interest to many: A few "blink and you'll miss it" moments when Cardi B is actually breastfeeding her baby girl Kulture in the video, as per Glamour. And just... wow. That's what I call empowering.

Women all over Twitter praised Cardi B for breastfeeding her baby girl in her music video for several reasons. First off, any time we get to see someone normalizing the super normal act of feeding their baby is a good thing. But also because Cardi B is out there proving that being a mother can be just one role in our lives that can exist alongside loads of other roles.

Some social media users also wisely pointed out that the "Money" video went a long way to affirm the concept that mothers don't stop being sexual beings simply because they gave birth.

Cardi B breastfeeding her little girl in the "Money" video was powerful for several reasons, not the least of which because she has been intensely private about sharing pictures of her daughter. She released the first picture of Kulture, who was born on July 10, on Dec. 6 (incidentally just one day after sharing the news that she and husband Offset were separating, as per CNN).

In my opinion, Cardi B's message about her daughter is perfectly clear: She controls the message. She decides when to share pictures of her daughter and when to include her in her work. Because she's the one calling the shots in every corner of her life.

And that's not the worst lesson to learn from her "Money" video: Paying homage to all of the parts of yourself. Even when you're a mom.