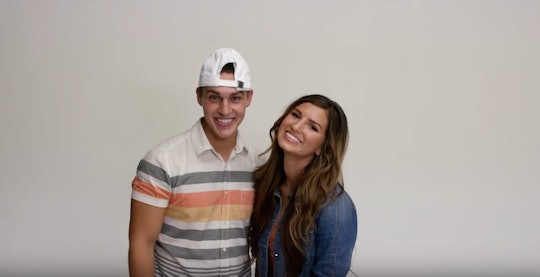 Oh, morning sickness. There's nothing that takes the sweetness out of pregnancy like the urge to vomit every time you smell your favorite food or, you know, breathe. Fortunately, the waves of nausea pass after the first trimester for most mamas. But Carlin Bates Stewart's latest pregnancy update shows that she is still riding those waves into her second trimester. Thankfully, though, the moms of Instagram were there to offer some of their tips and tricks to keep her nausea at bay. A couple of lucky followers even got responses from the expectant mom herself!

Carlin and her husband, Evan Stewart, announced their pregnancy news earlier this month. "We are beyond thrilled to be expecting our first child. Spending every day with your best friend and building a life together has already exceeded our happiest dreams," they told Romper in a statement. "We are so happy at the thought of parenting together. Three at the table sounds perfect!"

Since the announcement, Carlin has already shared a couple of updates. The first, posted about a week ago, announced how far she was along in her pregnancy. "Feeling so thankful to be carrying such a precious gift," she wrote on Instagram. "Thank you Instagram family for being so encouraging and supportive with the many comments, prayers, and the excitement you have shared!" She added the hashtag, #16weeks and #babystewart2020.

The next post, shared on Sunday, Carlin revealed she was experiencing some morning sickness, though it seems to strike at all hours of the day, now over a month into her second trimester.

"Dinner was delicious... until I got home. Thank you @evanpstewart16 for taking such good care of me... xoxo #pregnantlife," she captioned the sweet shot of her and Evan.

Many of the expectant mom's followers jumped at the opportunity to offer her some suggestions for relieving her misery. They suggested everything from essential oils, to vitamins and minerals, and all the ginger.

"Try ginger, anything ginger: ginger chews, ginger capsules, ginger ale, ginger snaps, fresh ginger in a smoothie/protein/juice drink," one person wrote. "Ginger chews are a bit spicy, but will cure my nausea from motion sickness or anytime I have had nausea."

Another suggested that she eat multiple small meals throughout the day. "Been there. The key to nausea (and all the fun things that follow it)... always be munching on something!" they wrote. "Try your best to always have something to eat. My go-tos were dry Cheerios... I ate a handful before even sitting up in bed... And always had some on me. Good luck!" And it seems that Carlin took that recommendation to heart; she replied with a comment of her own, saying, "Love this! Thank you!"

Unfortunately, morning sickness isn't all that Carlin has had to suffer through during her pregnancy. Carlin revealed to People that she suffers from the same blood clotting disorder as her sister Erin and Evan has to give her "two shots daily."

While her followers likely won't have recommendations to get her through the more serious risks associated with this medical issue, the support system they've offered undoubtedly goes a long way. As she stated in one of her bump-dates, her followers have been "encouraging and supportive" with their comments and prayers. I have no doubt that their support will follow her through the rest of her pregnancy as well.