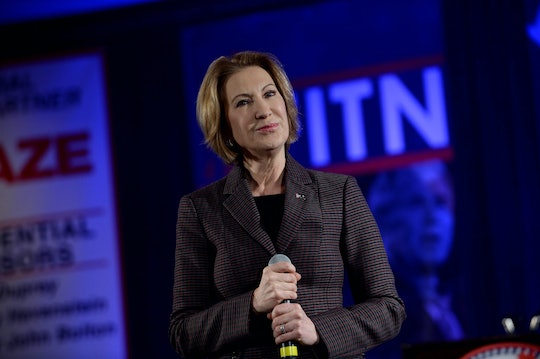 Politics is a tough business, and candidates often have to work hard to discredit their competition and gain a lead up, especially when the goal is the White House. But even though the stakes are high, former Hewlett Packard CEO Carly Fiorina personally attacked former Secretary of State Hillary Clinton during the GOP presidential debate Thursday, according to Business Insider — and it was completely uncalled for. Although the Washington Times noted that Fiorina claimed in the past that she wouldn’t personally attack Clinton, Fiorina made headlines during Thursday's debate for suggesting that Clinton didn’t actually like spending time with her husband. But when debate moderator Megyn Kelly called Fiorina out Thursday night for backtracking on her original no-personal-attacks stance, Fiorina offered no apologies — and then took her criticism one step further, according to ABC News:

It wasn’t a political attack. I was pointing out that Hillary Clinton would do anything to gain and hold onto power, anything. Listen, if my husband did what Bill Clinton did I would have left him long ago.

Her bold and — let’s face it — pretty outrageous comment won applause from the crowd, but that wasn’t all Fiorina had to say about her political rival. She continued:

Here’s the deal: Hillary Clinton has been climbing the ladder to try and get in power, and here, now, she is trying for the White House, [although] she’d probably more qualified for the Big House, honestly. She's escaped prosecution more than El Chapo. She has not accomplished much of anything in her life. She's gotten every single foreign policy challenge wrong and she continues to lie to the American people.

It’s no secret that Fiorina is not a fan of Clinton, but her virtually-Trump-esque comments about Clinton were still surprising given how personal they were. But that’s not the only thing wrong with them. By continuing to focus on Clinton’s marriage, Fiorina’s comments are incredible sexist and degrading, not to mention completely irrelevant. And they blatantly demonstrate the double standard that is still so entrenched for women in politics: no matter what your professional life looks like, your personal life is always fair game for ridicule.

Former President Bill Clinton’s alleged history of sexual assault towards women is an important issue that should be discussed and taken seriously (as should all instances of alleged sexual assault). Bill Clinton settled one of the alleged assaults in court and the White House denied the other. Bill Clinton's personal lawyer, David Kendall, issued a statement in 1999 regarding an allegation that he raped Juanita Broaddrick, according to CNN:

Any allegation that the president assaulted Mrs. Broaddrick more than 20 years ago is absolutely false. Beyond that, we're not going to comment.

That conversation — about sexual assault — is entirely different than one criticizing the personal relationship between Bill and Hillary, particularly when it comes to whether or not they are in love or whether or not she should have left him. It’s offensive in general — how could anyone possibly know anything about the actual reality of their relationship, and why is it even anyone’s business, or right, to judge? But it becomes even more inappropriate when it is used to suggest that Hillary Clinton’s personal relationship decisions have any bearing whatsoever on her professional abilities as a presidential candidate. Especially because the same assumption would rarely — if ever — be made about a man.

Have any of the male presidential candidates from either party been asked about the dynamics of their personal relationships, let alone been judged because of them? Has anyone found it relevant to, say, ask Donald Trump whether his multiple, high-profile divorces suggest that he is incapable of successfully running a country? Has anyone assumed that Texas Sen. Ted Cruz isn’t fit for his job because his wife has actually gone on the record to say that he works too much? According to Politico, raw footage of Cruz’ campaign video showed his wife, Heidi Cruz, admitting that her children consider their father as “a guest in the house”:

When he [comes] home, [the children] always run to the front door, and jump on him and want to play games, because that’s what they do together. And one time, they were running towards the front door, and Caroline shrieked, ‘There’s a guest in the house! There’s a guest in the house! So even though they know he’s very much a part of our home, they do sometimes see him as a guest.

She also described Cruz’ parenting style as one where “he’s their friend” and “their buddy.” That doesn’t exactly go a long way to paint Cruz as an attentive, involved father, and yet, does anyone really care? When it comes to Cruz’ leadership ability, most people would likely agree that his political experience — not his parenting skills — should be what matters. But would the same thing be said if, say, Chelsea Clinton were to claim that she felt like her mother was never around? Or if Fiorina’s children or husband were to come out and say she’s neglected her family as a result of her work?

Fiorina’s on-going insistence that Clinton would “do anything” to be in power while also arguing that she should have left her husband suggests yet another problematic and sexist double standard that women have faced in their careers for years: that the only reason they have made it as far as they have is because they aligned themselves with a man. While Fiorina didn’t come right out and say it (or, at least, she hasn’t yet), she essentially implied that Clinton is so power-hungry that she stayed with her philandering spouse because she wanted to reap the benefits in her political career. That kind of idea assumes, of course, that there is no way that a woman with a law degree from Yale could ever ascend to such a high position of political power without a little help from her hubby.

To condemn Fiorina’s comments about Clinton’s personal life is not necessarily an endorsement of Clinton’s ability to run the country — but that is exactly the point. It should be considered outrageous to voters that a candidate would make such sexist and antiquated claims, even if they think Clinton would be an absolutely terrible president. Because the next President should be chosen for their actual ability to lead the country. And because, seriously, it is 2016. It is way past time that we let these inane double standards die.