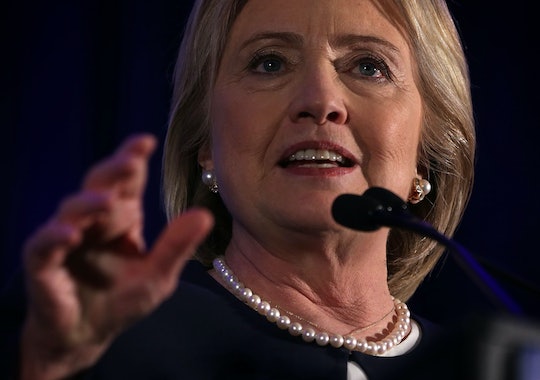 At a campaign stop in Hooksett, New Hampshire on Thursday, Hillary Clinton was asked about allegations of rape and sexual harassment made against her husband Bill Clinton in the '90s by Paula Jones, Kathleen Willey, and Juanita Broaddrick. Hillary has said publicly that all rape victims should be believed, and that rape should always be treated as a crime, but critics are arguing that her new message stands in direct opposition to the way sexual assault claims were handled when they were lobbed at her husband while he was governor of Arkansas and later president of the United States. (Bill Clinton has denied those claims. Romper reached out to the Clinton Foundation for comment Friday but did not immediately hear back.) When a woman in the audience asked whether Hillary would also agree “that Juanita Broaddrick, Kathleen Willey, and Paula Jones [should] be believed as well?" she responded:

Well, I would say that everyone should be believed at first until they are disbelieved based on evidence.

On the surface, it sounds like she was diplomatically agreeing, maintaining her feminist viewpoint while not engaging too much with a question that was clearly intended to rile her. And maybe that was her intention. But there is also a lot that is problematic about her comments (and particularly her delivery) that was bound to make some voters wonder what it is that Hillary truly believes, and whether she is really as much of an advocate for sexual assault survivors as she purports to be.

Clinton's demeanor as she answers this question was a bit cringe-worthy — she answers with a proud smile, and to applause, like she came up with the perfect answer. Clinton is a career politician, sure, but rape isn’t just another campaign trail topic. It’s serious and traumatic, and far too many women know what it feels like to speak up and then not have their experience taken seriously. If Clinton really believed in the value of not doubting women who have been raped or sexually assaulted, you’d think she’d seem a little less proud of herself for deflecting the question.

Clinton’s choice of words was also incredibly misguided. By qualifying her claim that victims deserve to be believed “until they are disbelieved based on evidence” really only further supports the prevailing (and incredibly problematic) idea that victims being “disbelieved based on evidence” is something that actually happens often enough to be a major problem. We know that reporting a false rape is incredibly rare, with a Mashable report noting that the statistics peg false reports at between two percent and 10 percent (though the reality is likely closer to the lower end of the scale).

What’s more is that the cases in which evidence even exists one way or another are also rare. In most cases, judgments come down to factors like the victim’s credibility, or whether jurors believe there are any possible holes in his or her statements (not to mention the still-lingering impulse to ask questions like, “what were you wearing? ”or “were you drinking?” as though they are relevant). According to a University of Virginia Law School report, domestic violence attorney, Jon R. Zug asserts that sexual assault cases are some of the most difficult to try:

There is nothing that justifies a rape. Ever. Never.

But, maybe we should give Hillary the benefit of the doubt. After all, the question was meant to put her on the spot. If she’d simply said, “I think our default reaction should be to believe women who make accusations of sexual assault,” it would have incited a media firestorm that would completely overshadow other really important elements of this campaign that are also worthy of discussion — like gun control in light of the recent mass shootings, for one. But at the same time, if she answered anything other than “yes” (regardless of her actual feelings about Bill’s history), she risked being called a hypocrite and having her advocacy for sexual assault victims dismissed as inauthentic.

It's also possible that she misspoke. Maybe she didn't mean to say "until they are disbelieved based on evidence." Maybe she meant, "unless there is overwhelming evidence that they are lying, and the number of women who are assaulted is so much larger than the tiny number of women who make false rape claims make that an incredibly rare occurrence." Let's hope so.

Ultimately, Hillary Clinton continuing to say that rape victims deserve to be believed is valuable, because of course rape victims deserve to be believed. It’s not a secret that rape cases are grossly underreported, and that they rarely result in prosecution anyway. But if Hillary really wants to stand up for women (as well as all humans everywhere), then she needs to drop the qualifying rhetoric about the possibility of being proven false. As long as that message is still circulating uncontested, it will continue to be extremely difficult (and wholly traumatic) for victims to come forward.

More Like This
A Teen Was Body-Shamed By Matt Gaetz. She Raised Over $700,000 For Abortion Funds.
7 Questions To Ask Your Child's Kindergarten Teacher
Yellowstone's Kelly Reilly Has A Much More "Content" Married Life Than Beth Dutton
20 Adorable Photos That Prove Prince William & Princess Charlotte Are Thick As Thieves