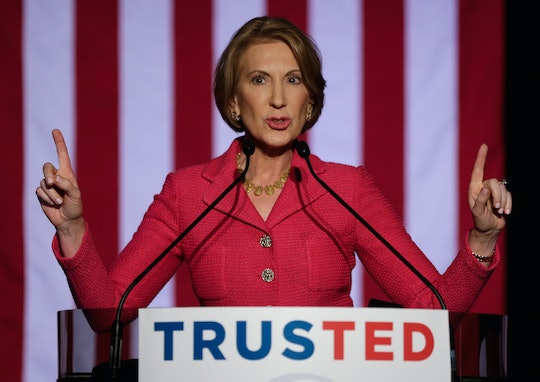 Carly Fiorina Once Dissed Ted Cruz, Which Proves Just How Out Of Control This Race Is

On Tuesday, Texas Sen. Ted Cruz held an important campaign rally, during which he announced former Republican candidate Carly Fiorina as his running mate. Aside from the fact that announcing a running mate this early in the race is a little like picking a venue for your wedding before being proposed to, it's not clear that Fiorina and Cruz even have all that much in common, politically. In fact, just this past winter, Fiorina dissed Ted Cruz on the campaign trail for being "just another politician" who says things he doesn't really mean to get votes. That doesn't seem to jive with her new role as the conservative's running mate. But then again, this is the 2016 presidential race — nothing makes sense anymore.

"Carly is brilliant and capable and yet she experienced the hard-scrabbled world of being a female business professional [...]," Cruz said on Tuesday, explaining his choice. "Over and over again, Carly has shattered glass ceilings. ... She is also a woman of deep principal."

Although Fiorina's earlier remark was bound to rear its head, following Cruz's hand-selection this week, other GOP candidates have helped that process along. On Tuesday, Republican frontrunner Donald Trump was quick to tweet out a video of Fiorina talking to CNN months ago, in which Fiorina claimed Cruz would "say whatever he needs to say to get elected." Of course, shortly after those remarks in January, Fiorina endorsed Cruz and has been on the campaign trail stumping for him ever since. (Fiorina justified it by saying that she had voted for the candidate because she wanted to reclaim the Republican party.)

This, of course, is politics, and candidates tend to say and do things that don't always seem in line with what they originally said or did. Let's just time travel (if only because the GIFs are so good) and remember New Jersey governor Chris Christie's uncomfortable facial expressions when he endorsed Trump after attacking him in the debates this fall, for reference's sake.

Carly Fiorina stumping for or running with a candidate that she once said she couldn't believe from one day to next isn't totally that far off from Christie's move, but it's a sign that neither she or Cruz have any sense of authenticity. This is politics, one has to at least pretend to stand for something, right? (Especially after you introduce your VP running mate as someone who stands for correct principals.)

Are voters (and seasoned political consultants) so quick to forget that having a Republican candidate choose a female running mate because she's a woman doesn't really work? (I'm looking at you, John McCain.) At least Fiorina has been vetted by the early primary process, unlike the Republican party disingenuously choosing former Alaska governor Sarah Palin as a running mate in 2008 before prepping her to take interviews or talk foreign policy. Even Dick Cheney admitted the mistake.

Since Fiorina and Cruz have gone at it in the past, floating her as a running mate does seem like a simple way to woo voters and allow conservative Republicans to convince to themselves that they think women matter. Then again, since endorsing him in March, all of her earlier disbelief in the candidate seems to have been forgotten.

If anything, Fiorina is not what one might call a feminist, so at least she is not totally sacrificing her values. But it does seem odd to team up with a man that just months ago she publicly called out for pandering to voters. Announcing Fiorina as a running mate seems more like a cheap way to drum up excitement for the Cruz campaign and take on Trump in the upcoming primaries than anything else. Talk about playing the "woman's card."