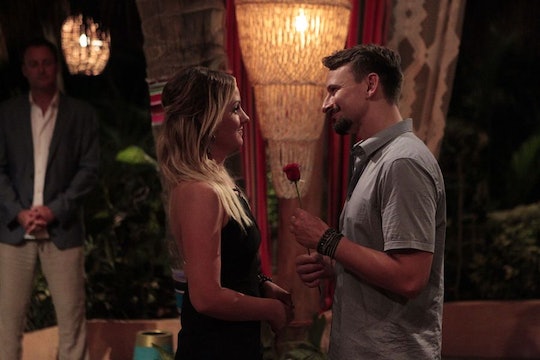 We're only a week into the third season of Bachelor in Paradise and sparks are already flying between several of the contestants. Recent addition Josh Murray is hot and heavy with Amanda Stanton, swooping in and wooing her away from Nick Viall almost instantly. Lace Morris and Grant Kemp are definitely vibing, according to some very suggestive night camera footage. Other couples, on the other hand, are stalling rather than sparking – like Carly Waddell and Evan Bass. On the August 9 episode, Carly tells Evan she wants to be friends on Bachelor in Paradise and the dude is totally heartbroken.

To recap, Evan and Carly started things off as just pals. They were frequently seen chatting together, watching Chad "Hurricane Chad" Johnson wreak havoc on Night 1 and just taking in the surrounding antics as their fellow contestants hooked up and swapped partners in due course. Evan got a little flirty, but he's not a particularly aggressive or forward dude, so it was a lot of him leaning his head on Carly and being cute. Carly was curious about whether Evan was a good/passionate kisser, but after waiting for him to make the first move during the August 8 episode, she went ahead and kissed him first. It went... not well.

While Carly wasn't thrilled with their first kiss and decided she wanted to avoid Evan, the Bachelor Powers That Be weren't having any of that. In the name of maximum drama (and maximum awkwardness), Evan got the very next date card and, naturally, asked Carly. Poor Evan utterly misread the first kiss situation, thinking it was all "butterflies and explosions" between them. And naturally, the date was centered around kissing once again, when the two were made to break the Guinness World Record for longest habanero pepper kiss. Because basically they're trying to torture Carly this season, I guess?

In the aftermath of the habanero pepper kiss, Carly was definitely not feeling the sparks. As she mentioned several times (both in her confessional and to Jared), she literally threw up after it – and admitted that it wasn't just eating the super hot pepper in one go that made her barf. Yikes.

Carly, being her no-nonsense, ballsy self, quickly decided that she wasn't the type of girl to lead a guy on. That's not what she's in Paradise for. She's there for the ~right~ reasons, duh. So she went to Evan soon into this week's Tuesday episode and confessed to him that the chemistry was just not there between them and that she'd prefer to be friends, putting a solid end to the romance between them. She left out the part about vomiting post-kiss, which was kind of her.

Of course, Evan, who has been extremely vocal about his strong desire to find love and how intensely he felt about Carly, was crushed. Poor guy. Evan went to his room to deal with all his feels about the very sad (and very quick) break-up and wonder whether he should just give up and leave Paradise, assuming he wouldn't get a rose at the upcoming ceremony. But I wouldn't count Evan out just yet! He might still make things work with another one of the ladies. Here's hoping, anyway.