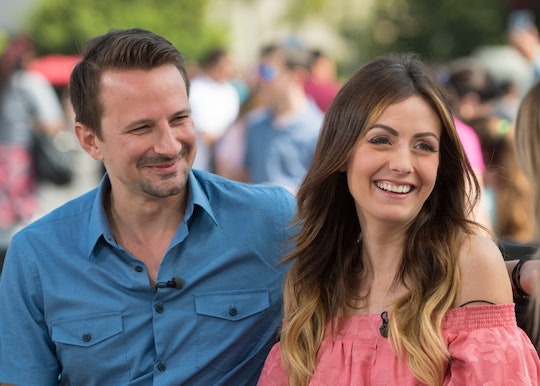 "There Is Such A Stigma": Carly Waddell Defends Decision To Stop Breastfeeding

The Bachelor alum Carly Waddell and her husband, Evan Bass, recently welcomed their second child. They named their boy Charlie Wolf, and the little guy joins his big sister, Bella, who was born in February 2018. Everything has gone smoothly since Charlie's arrival, except for one thing: Carly Waddell is no longer breastfeeding because of the physical and emotional toll it has taken on her well-being. And you know what? She feels no shame about the decision.

Waddell and Bass announced the arrival of baby number two a few weeks ago, taking to Instagram to share a family photo at the hospital. "Baby Charles was born on November 12th at 11:22 am in Nashville, TN," Waddell captioned the post. "Charles was born quickly, after about 15 minutes of pushing, and came into this world face up (OP to the medical community) with one eye open and one eye closed like a pirate looking directly at me!" Ha!

Although the fam was all smiles (minus Bella, who donned a curious expression regarding this whole little brother thing), postpartum life for Waddell got real very quickly. Waddell expanded on this sentiment in an Instagram post shared Wednesday, writing, "It’s been a week since Charlie was born, he is the greatest blessing and one of the greatest lessons for me as a mom. I had all these hopes and dreams that postpartum would be easier this time. But I still ache. I’m healing. I’m tried."

This was the same situation for Bella, who Waddell described as a "colicky newborn" because "she cried and cried for months."

"Threw up. Had gas pains. I breastfed for months because that’s what I was told was 'best,'" she continued. "When I changed Bella to formula, she was a new, happy little baby."

Despite Waddell's issues with Bella, she had hoped things with Charlie would be "different." Unfortunately, this wasn't the case. "I decided to stop breastfeeding and try him on the same formula Bella was on, and within a bottle or two he was so happy," The Bachelor alum penned. "He stopped crying. He could relax. He could sleep. He smiled."

Knowing her message might incite backlash, the mom-of-two launched into a defense of her position, saying, "There is such a stigma about breastfeeding. If you don’t do it, you don’t care about your children’s health. You don’t love you kids enough. You’re being selfish. You just aren’t being a good enough mom."

She added, "I found this time is that I made a really hard decision within myself as a mom to listen to my gut about what was best for my child. And you know what...it worked. He is soooo happy and that is all that matters."

I don't know who needs to hear this, but Waddell is so right in everything she said. Don't persist in doing something because you were told it's what's "best" — do what works for you and your baby. If that's bottle-feeding, wonderful. If that means breastfeeding, bravo. As long as you're not suffering to avoid parenting stigmas, it's all good.

So props to Waddell for opening up on an important issue and reminding parents that their postpartum plan might not always go as you had hoped. Because that's 100% OK.