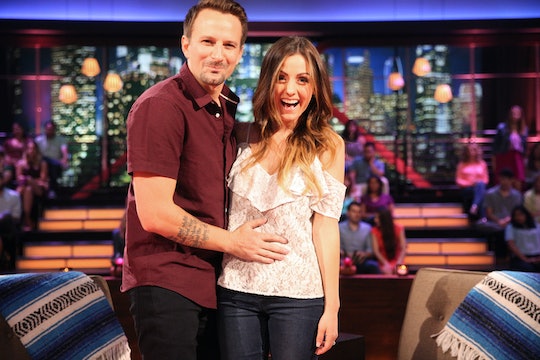 In announcing the birth of her second child with Evan Bass on Thursday, Bachelor alum Carly Waddell said she helped deliver her own baby. Waddell and Bass introduced the world to their newborn son Charles on Thursday in an Instagram post that described his birth as "beautiful and unique." As the couple revealed, baby Charles had been born two days prior.

"I HAD A BABY THIS WEEK!!!! Baby Charles was born on November 12th at 11:22 am in Nashville, TN," Waddell wrote Thursday on Instagram. "He literally jumped straight into my arms, because the doctor let me pull him out the rest of the way!" Ultimately, Waddell described baby Charles' birth as having been "a beautiful and unique delivery."

And it seems that Waddell's hands-on help wasn't the only "unique" aspect of Charles' delivery. As the singer and former Bachelor in Paradise star explained, Charles was born in an occiput posterior position. "Charles was born quickly, after about 15 minutes of pushing, and came into this world face up," Waddell announced on Instagram. Not only was baby Charles born face up, but he reportedly also had "one eye open and one eye closed," according to Waddell, who described the newborn as having looked "like a pirate looking directly at me."

In announcing the arrival of her son, Waddell shared a handful of photographs taken shortly after the birth as well as a sweet video of a cooing baby Charles. In one photo, Waddell and Bass cradle both their newborn son and their 21-month-old daughter, Isabella "Bella" Evelyn. In a second photo, Waddell can be seen holding the infant close against her chest. A third photo shows Liam and Ensley Bass, two of Bass' sons from a previous relationship, meeting their younger brother in the hospital. "We are so thrilled and in love with our new little addition," Waddell wrote on Instagram.

The former Bachelor contestant also took a moment Thursday to explain the meaning behind her son's full name: Charles Wolfe Bass. "Charles is a beloved family name on both sides," Waddell wrote on Instagram. "We wanted to incorporate the name wolf because he was born on a full moon and started howling the second he was born."

But Waddell did acknowledge that the name she and Bass chose for their son has recently been a popular choice among celebrity parents. According to US Weekly, Zooey Deschanel and Lauren Conrad have both named their sons Charlie Wolf. "Apparently this is a very popular name right now," Waddell wrote. "Which makes my grandfather seem even cooler than he already was!"

In an Instagram post of his own, Bass joked about naming his newborn son after a Gossip Girl character. "You better believe I had to name a kid Chuck Bass!!" the Bachelor alum wrote. "His first word shall be 'I’m Chuck Bass.'"