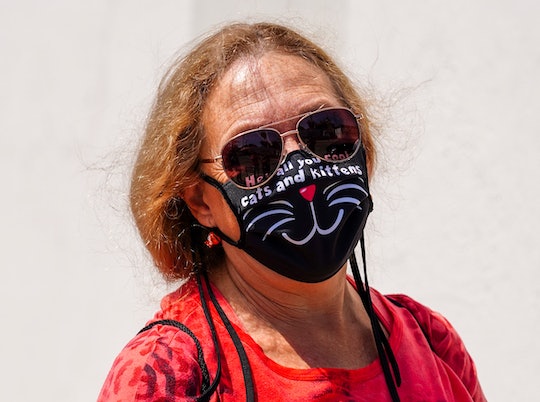 Here's the most amazing news all you cool cats and kittens have heard in months: Carole Baskin's first Dancing With The Stars song has been announced, and it will be Eye Of The Tiger. Because this reality star and Big Cat Rescue owner knows her brand and is sticking with it until the bitter end.

On September 2nd, ABC announced on Good Morning America that Baskin will be a contestant on the next season of Dancing With The Stars. Of course, around 34 million of us remember the Big Cat Rescue sanctuary owner from watching her feud with incarcerated zoo owner Joe Exotic on the wildly popular Netflix documentary Tiger King during the early days of the coronavirus quarantine this spring. Baskin joins fellow reality stars like Selling Sunset's Chrishell Stause, former Bachelorette Kaitlyn Bristowe, and musicians like rapper Nelly and Backstreet Boy AJ McLean.

Baskin told Entertainment Weekly that she and her Dancing With The Stars partner, Olympic figure skating champion Johnny Weir, will be dancing the paso doble to the Survivor classic "Eye Of The Tiger," which could not be more perfect for a woman who has devoted her whole life to big cats. Baskin also said that she is "very excited about that. I'm actually sitting outside of costuming right now and I gave them the instructions of no fur, no feathers, no leather, and anything else. I don't care how wild, so just have a blast. I can't wait to see what they come up with!"

Baskin's partner Weir, who is a first time member of the DWTS cast, is just as excited to see what happens. He admitted to Entertainment Weekly that he watched Tiger King like everyone else, but hadn't made any decisions about Baskin based on what he saw.

"I was one of the many millions that just kind of sat with their jaws on the floor watching Tiger King," Weir told EW. "Having lived a huge part of my life in the public eye and in the spotlight, I know how things can be twisted and made into a fantastic story. So I can't say that I know Carole Baskin. I also know that I can't judge Carole Baskin based on what I saw in a Netflix series that was obviously edited against her to a certain degree."

Weir said he had another reason to be extra careful with Baskin, "I hope I don't cross her because she has a lot of big cats that she could sic on me."

When Carole Baskin debuts her "Eye Of The Tiger" dance with Weir on DWTS on Sept. 14 at 8 p.m. ET on ABC, I think most of us will have one big question on our minds... what will Joe Exotic think?