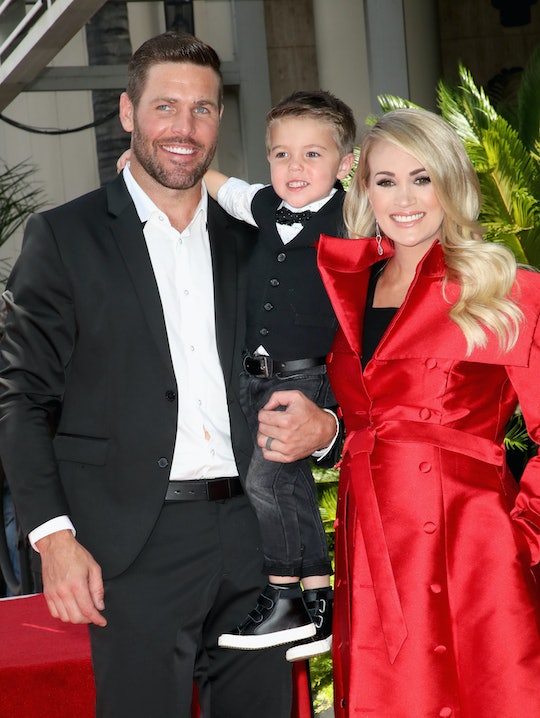 A few months ago, Carrie Underwood announced that she was expecting her second child. Since then, she has been keeping fans updated on her pregnancy — both the highs and the lows. And this weekend, she shared what is possibly her best update yet. Carrie Underwood's latest pregnancy update shows off the adorable and hilarious way her husband and son are helping her during her third trimester.

On Sunday, Underwood posted a video to Instagram of her husband, former hockey player Mike Fisher, and their 3-year-old son, Isaiah. In the clip, Fisher and Isaiah are both hard at work tying Underwood's shoes. (To be more specific, her glittery silver sneakers — girl, please let me know where you got those.) "I can no longer tie my own shoes...So glad I have such sweet helpers! 💖" the singer captioned the post on Insta.

Fisher was able to tie Underwood's right shoe with no issues — but their son struggled a bit with the left one. "You're doing a good job buddy," Underwood assured her son. "That's pretty close. You got it!" Fisher told him — but he certainly had not gotten it. As Underwood tried to convince Isaiah to let his dad fix the knot he had tied, the 3-year-old insisted he finish it on his own, and that he was doing it "the cool way," which seemed to be tying knots on knots on knots.

"Well if you do it too cool, I can't get it off later!" Underwood joked, before Fisher finally stepped in to fix it. "Nooo!" Isaiah protested. Look, buddy, you were doing a very adorable and "cool" job, but those are some killer shoes that your mom does not want ruined. A for effort, though!

As anyone who's ever experienced a third trimester of pregnancy probably knows, once your bump reaches a certain point, it can be difficult to do basic tasks like tying your shoes. Underwood is clearly happy to have her husband and son to lean on as her pregnancy is in the final stretch. In fact, on Christmas, she shared a sweet photo of Isaiah snuggling on her bump.

"I’m thanking the Lord tonight for His Son while I cuddle with mine. Watching Christmas movies with him while he uses my big belly as a pillow," Underwood captioned the serene shot. "Sweet ending to another great Christmas. Merry Christmas to all of you, from my family to yours!"

In October, Underwood opened up about how this pregnancy has been harder than her first time around. “It’s definitely different than the first time,” Underwood told Entertainment Tonight at the 2018 CMT Artists of The Year ceremony. “When they say every pregnancy is different, it really is. I feel like this one is just a little harder on my body for some reason,” she added.

Also at the CMT Artists of The Year ceremony, she explained how performing while pregnant is a different experience. “It's different. ... Your brain still thinks you have your old body, and then it's been invaded, taken over, and it's just different," she said at the event, as per Extra. "It's different singing. It's different walking around.”

Luckily for Underwood, she has a great support system to help her get through the rest of this pregnancy — and life as a mom-of-two.