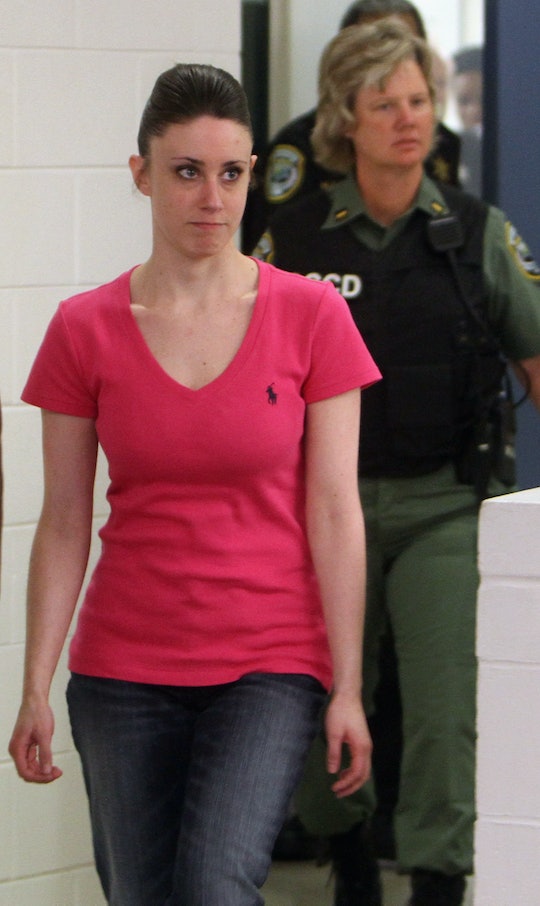 Casey Anthony was accused of killing her 2-year-old daughter, Caylee Anthony, in Orlando, Florida in 2008, and was later acquitted of the murder charges in 2011. Since that time, little Caylee's murder remains unsolved, and Casey Anthony herself has remained largely silent — until recently. After years of refusing to speak to the press about her daughter's murder, Casey Anthony gave an interview to the Associated Press that was released on Tuesday. During that interview, Anthony talked of her difficult relationship with her parents, in particular her father George Anthony. Now Casey Anthony's dad has responded to her interview, and he's made it clear he is hurt by her ongoing accusations.

When Caylee was reported missing by her grandmother on July 15, 2008, the world soon discovered that the little girl had actually been missing since June 16 and Anthony had allegedly never reported it. At the time, Anthony told police that Caylee had gone missing with a babysitter. She was arrested for alleged child neglect soon after. When Caylee's remains were found in a wooded area outside Orlando, forensic experts concluded that her dead body had allegedly been in Anthony's trunk. Casey's lawyer, Jose Baez, told the jury that Caylee had died of an accidental drowning and also accused George Anthony of allegedly molesting daughter Casey from the time she was 8 years old, though he produced no evidence to support that accusation. (George also denied the claims on the stand.)

In the end, the prosecution failed to provide enough evidence against Anthony and she was acquitted. But questions have lingered ever since.

Anthony's interview with the Associated Press did little to clear up any unanswered questions; While she admitted that she frequently lied to the police when her daughter was missing (she said in the interview that she had lied about a babysitter; about where she worked; "invented" two people; said she had told them that Caylee was missing; and recalled admittedly fabricating a phone call from Caylee the day before Caylee died), she also asserted that she still slept "pretty good at night." (Attorney Baez has not yet responded to Romper's request for comment on any claims against Anthony's involvement.)

Anthony also continued to point the finger at her father in Caylee's death; Anthony said she believed that her daughter accidentally drowned and that her father George allegedly covered up her death. (There is no apparent evidence to support this claim.)

Anthony's parents released a statement to People in response to the Associated Press Anthony's, in which they expressed George Anthony's reaction to the claims made:

After years of silence, Casey Anthony has decided to complete an interview and has once again pointed to George Anthony, her father, as a suspect in the disappearance and death of his granddaughter, Caylee. George, who has continued to try and move forward from this tragedy and who was vindicated on multiple occasions, is once again forced to relive the hints, rumors, lies and allegations that are being made by Casey Anthony. He has specifically stated that "his heart hurts even more now."

Given the high profile nature of the case, it's a guarantee that this won't be the last that we hear from Caylee's family on her murder; But for now, both Casey Anthony and her family must live with the fact that nothing will bring the young girl back — a tragedy for all involved.