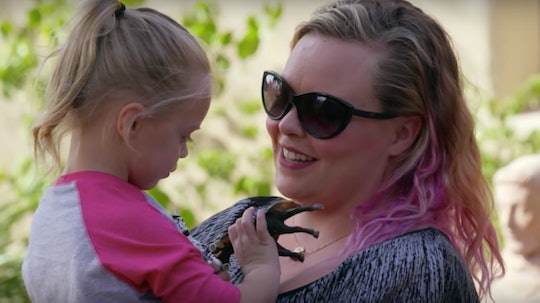 Catelynn Lowell Opens Up About Her Mental Health, & She's All About Crushing The Stigma

It's not easy to talk about mental health struggles, especially when you're a public figure. Which is why it's so commendable that Teen Mom OG's Catelynn Lowell is opening up about her mental health treatment and how she's handling being back from her third stint in a mental health facility. It hasn't been an easy ride for the reality TV star and mother of 3-year-old daughter Novalee. Back in January, just a few weeks after leaving treatment, Lowell tweeted that she was heading back for more, with the support of her husband Tyler Baltierra.

She wrote, "Well they say third times a charm… I’m going back to treatment people for 6 weeks to work on my trauma and getting on different meds. THANK YOU @TylerBaltierra I LOVE YOU SO MUCH!!!!! You are my light!! And nova you are my sunshine #KeepTalkingMH." A fan asked her what kind of trauma she was talking about and she responded that it was her "childhood trauma," according to Us Weekly.

Back in November, she had entered a six-week treatment program after having suicidal thoughts. When she got back just before New Year's Eve, she tweeted, "So excited for the future and seeing my family!! Six weeks of treatment and I feel good! Gotta work it when I get home thanks for all your support," she tweeted on her way home.

As anyone who has struggled with mental illness knows, it's not easy to transition back and forth. Hopefully, this time around, she'll be able to integrate everything she learned while away into her daily life. And if not, keep seeking help. Lowell seems really hopeful, which is a good sign.

During an interview on Coffee Convos with fellow Teen Mom star Kailyn Lowry and Lindsie Chrisley, Lowell and Baltierra opened up about how she was handling the transitions. The MTV star said on the podcast:

I feel way better. I did a whole med switch I did genetic testing and found out that the medication I was on for five years doesn't even work for me. So they put me on different medications and they seem to be working really well. It all stems from the trauma in my past, so I'm going to have to keep digging deep into that.

Isn't that good to hear? Whenever you can work out what might actually help and get more specific treatment plans in place, it's a thing to celebrate. Some people on Twitter didn't see it that way, and attacked Lowell for being so open about her mental health struggles.

But Others Cheered Her On

Lowell is all about facing the haters and battling the stigma surrounding mental illness, which only makes it harder to get help, since people fear being ridiculed or judged. She said on Coffee Convos:

I think it needs to be out there. That stigma needs to go away because people need to talk about it. It's out there and it's real and it affects people, even normal people, people on reality TV, moms, etc.

Her husband had her back, having had his own struggles with mental health, he gets it. "A lot of people will comment on social media and they'll just say the nastiest things and it's all through ignorance because they don't really understand the disease or understand the illness," Baltierra said. He added:

They keep thinking, "Oh, you're depressed. Just get up and get a hobby and fix it," and it all comes out of pure ignorance. The more we talk about it, the more educated people become about it and will lessen that stigma.

They're both right. The more examples people see of people handling their mental health and making it a priority, the better. Whether this is her last trip to a mental health facility or she needs 10 more, people should be happy to see her taking care of herself. It's never easy to battle mental health, so it's good to see the people closest to her are in her corner. Forget about the internet trolls and keep crushing the stigma, Catelynn.