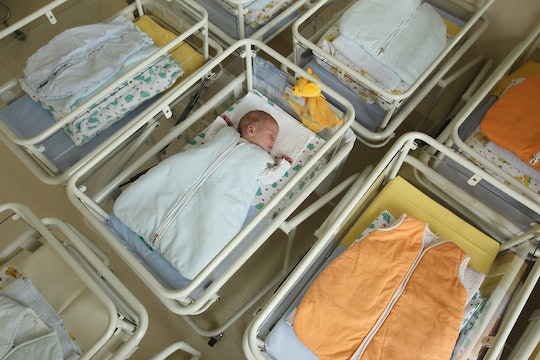 It seems as though we could well be on the precipice of a baby shortage in the United States. I know what you're thinking; walk into any toy store or Chuck E. Cheese and then come talk to me, the world looks like it's teeming with kids. And let's not forget the KarJenner baby boom of 2018... everyone was talking about babies all the time, how could there be a deficit? Apparently, the ever-expanding Keeping Up With The Kardashians family was not truly representative of the rest of the country. In fact, according to the Centers for Disease Control and Prevention, Americans aren't having enough babies to replace the current population.

Fertility rates have been dropping for the past seven years across the country, and the CDC doesn't have a specific answer as to why this is happening. In order to replace the population (and remember we're not talking about growth here, merely replacing the 325 million Americans who are already alive, according to the CDC's data) there needs to be 2,100 births for every 1,000 women in their lifetime.

Unfortunately, the CDC's report released on Thursday found that the rates are well below this number — 16 percent to be precise. Women of childbearing years are giving birth at a rate of 1,765 per 1,000, which is not enough to replace the population of the country. This rate has been steadily dropping since the last seven years, but the drop in 2017 represented the biggest percentage in history, according to Forbes.

So why are the fertility rates dropping? While there's no clear answer, Dr. Helen Kim, an associate professor at Northwestern University’s Feinberg School of Medicine, told NBC News he believed that several factors could contribute to the issue. For instance, women are delaying marriage and childbirth later and later, in part perhaps to pursue education and career but also because medical technology offers them the opportunity to realistically delay having babies.

Unfortunately, things might not always work out as they plan. "I think as women delay childbearing they may not realize that fertility declines with age and that there are limits to what fertility treatments can do for them," Dr. Kim told NBC News.

There has also been a dramatic drop in teen pregnancies, according to the Office on Women’s Health, which is clearly very good news, not to mention a shifting perception on how many children might be considered ideal.

A 2015 PEW Research survey, for instance, found that 48 percent of Americans felt that the optimal family size would be two children or fewer. Which makes sense, children are expensive (as of 2015, the average cost of raising a child in the United States was more than $233,000, according to The Conversation) and in 2019 there is still no such thing as federal paid maternity leave in the United States. That certainly seems as though it could be considered a contributing factor to declining birth rates.

There is still hope, of course. Women are able to freeze their eggs, which would allow them to have babies later. And some economists believe that a decreasing population is not necessarily a bad thing for the country, as written in this 2014 article in Science.

So at the end of the day, it's safe to say that every woman needs to make her own decisions about her fertility. Potentially declining population be damned.