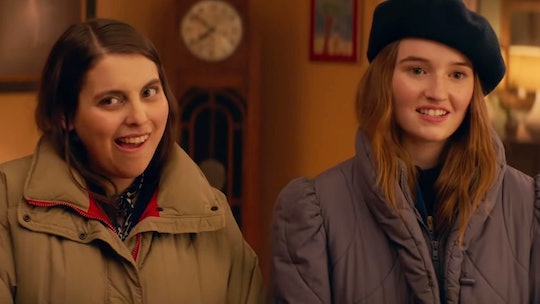 So what did you do for Memorial Day weekend? If your answer didn't include Olivia Wilde's directorial debut, Booksmart, then you seriously need to reconsider your plans for the upcoming week. On May 24, the coming-of-age comedy launched in theaters and paled in comparison to other big studio releases. However, the response to the Annapurna Pictures film has been so overwhelmingly positive that support has been pouring out from fans and critics alike. Even celebs are tweeting about Booksmart to encourage people to watch the film.

According to the official Booksmart website, the film is a "wildly fresh" and modern look at high school best friends and "the bonds we create that last a lifetime." In the movie, two academic overachievers named Amy (Kaitlyn Dever) and Molly (Beanie Feldstein) realize that they should have studied less and played more. Now on the eve of their high school graduation, the two BFFs decide to cram four years of mischief into one epic night of partying.

Booksmart originally opened to a number of positive reviews at the South by Southwest Film Festival in Mar. 2019. The small film was then given a wide release, which presented challenges of its own.

"Everyone agrees it's a good movie," senior media analyst at ComScore, Paul Dergarabedian, told The Hollywood Reporter. "But if you go out there into the arena that is the early summer marketplace, it is no easy feat to keep your head above water, and Booksmart is not alone."

“We have always believed, and actually proven, that we have a movie that audiences love, and we are expecting the film to play well into the summer,” Lumis said. “We are not quitting on this great film. We're confident that it's going to leg out."

Although Booksmart opened with low numbers, the film has garnered a bit of media attention after a flood of celebrity reactions on Twitter. Following the premiere, Wilde tweeted about her film and urged fans to support movies made by and made for women.

"Anyone out there saving @Booksmart for another day, consider making that day TODAY," the director wrote. "We are getting creamed by the big dogs out there and need your support. Don’t give studios an excuse not to green-light movies made by and about women."

Following Wilde's tweet, a number of celebrities such as Mindy Kaling and Ryan Reynolds chose the social media platform to help promote the Booksmart.

The Tuesday after the film's debut in theaters, Diana Silvers, plays Hope in Booksmart, posted a video of herself singing to Taylor Swift's "Delicate."

Swift then responded on her Instagram story to tell her fans she bought tickets to see the movie and to congratulate the cast.

"Just bought tickets!! Guys go see Booksmart cause in this house we support @oliviawilde," Swift wrote, via BuzzFeed. "Congrats to @dianasilverss @beaniefeldstein @kaitlyndever and the rest of the cast on the incredible reviews!!!"

And the cast's response was adorable. "Ummmm i dont even care that boys ghost me. Taylor Swift CAME THRU," Silvers wrote on Twitter. "And that is feminism working."

From all the love Booksmart is getting on Twitter, the film is bound to reach new lengths in the next few weeks. Just don't be one of those people who pits Booksmart against Disney's Aladdin. Remember that celebrating a female-directed movie doesn't come at the cost of a major studio film honoring a diverse cast.

Booksmart is in now in theaters.