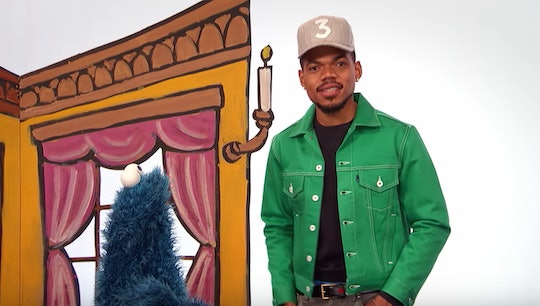 Chance The Rapper Might Be Joining The 'Sesame Street' Movie Cast

Get excited to see Big Bird, Elmo, and more of their famous muppet friends on the big screen because a Sesame Street movie starring Anne Hathaway is happening and Chance the Rapper might be joining the cast, too.

The movie, set to be released in early 2021 and will soon begin production, will reportedly follow all of the beloved Sesame Street characters as they are "mysteriously expelled from their own neighborhood, forcing them to collaborate with history show host Sally Hawthorne (played by Hathaway) to prove that Sesame Street actually exists," according to Variety. And, according to a new report from Collider, Chance the Rapper is apparently in talks to join the fun, too. Romper has reached out to his reps for comment on the reports.

Chance is no stranger to visiting Sesame Street, so it's not all that surprising that the he may have interest in the movie. For instance, the rapper, actor, and father of two daughters appeared on Sesame Street in January 2019 and participated in a play rehearsal with Cookie Monster and Elmo. While there, he recorded the sweetest message with the help of the muppets for his daughter, Kensli.

This wouldn't be his first rodeo either; Chance lent his talent to the 2019 live-action remake of The Lion King, a movie he was "obsessed" with while growing up, as he shared on Instagram.

This past September, Chance recalled his love for Sesame Street in a sweet video shared to Sesame Street's YouTube channel. "It was introduced to me when I was super, super young and now my daughter watches the show," he said. "But I remember seeing some of my favorite artists and got familiar with artists at a really young age, like Stevie Wonder and Ray Charles."

"My memory of Sesame Street is it teaching me a lot of my morality and understanding of how to play and making friends that were different from me," he added. "And singing happy songs."

While the full cast hasn't been confirmed yet, Jonathan Krisel, the film's writer and director, told The Hollywood Reporter in February 2019 that the movie is "going to be big."