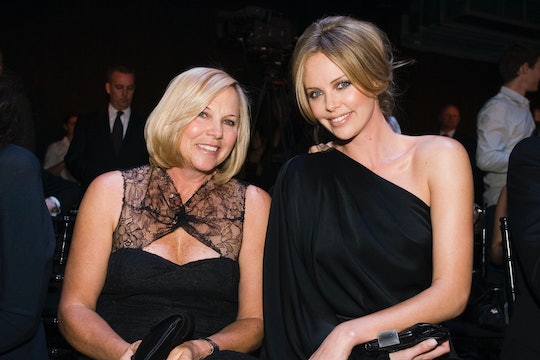 I was raised by a single mom in my grandparents' home for many years. When I became a single mom of four at the age of 30, I lived on my own. But my mom definitely co-parented with me. She was the other person at the soccer field, the purchaser of high-end snack foods, the shoulder to cry on, the maker of dinner, the pourer of wine (for me). So when I read in ELLE about Charlize Theron opening up about "co-parenting" with her mom, I got a little choked up. As I'm sure many other moms and dads out there who have looked to their own parents for support must have felt; because for so many single parents, this is our truth.

Theron is a mother of two children she adopted in 2012 and 2015, 6-year-old Jackson and 2-year-old August, and she spoke to ELLE recently about what that experience looks like for her. She is currently single, having broken off her engagement to Sean Penn in 2015, but don't go assuming that means she really considers herself a "single" mother. Fortunately for Theron, she's got some incredibly qualified help to rely on living just down the road from her: her own mom, Gerda Maritz.

Theron gave Maritz full credit for being an excellent "partner in crime" when speaking with ELLE:

I knew that I would have to have my mom help me if I was going to do this as a single parent. To not acknowledge her in co-parenting my children would be a lie... I would feel pretty alone if I didn't have a partner in crime in all of this.

Not that her mom appeared to need much incentive to help her daughter raise her grandchildren, as the Tully actress told the publication:

She has jokingly said, "Being a grandparent is what I was born to do." I was like, "Yo, b*tch! What about me? Was it not to raise me? I'm your kid!" But I'm so lucky to have that.

Theron initially struggled with the idea of asking for help when she initially adopted her son Jackson in 2012, because she says she worried that, "If I don't do all of this, then maybe I am a bad parent." But when she adopted daughter August in 2015, she realized something, as she told ELLE:

I am happier and my kids are happier if I ask for more help. People think I have a staff of 40, but I don't. I have one nanny and my mom up the street and amazing friends and family. I call them my village. But I've learned to balance things out more.

The Atomic Blonde actress has long credited her mom for guiding her to become the parent she is today. In a 2012 interview with Vogue UK, she said her goal was to be a "fair, tough, loving, and supportive" mom like the one she was lucky enough to have growing up. She added:

My mom has made it possible for me to be who I am. Our family is everything. Her greatest skill was encouraging me to find my own person and own independence.

I know every family is different, of course. But as someone who was joyfully raised with the input of several strong, independent, willful women in my life, I can tell her that co-parenting with your mom is a pretty wonderful arrangement for all involved. I raised my own sons with the support of my mother, not to mention several other women I respect, and I like to think it's given them a better perspective on women and life in general.

And just knowing you're not alone as a single parent, celebrity or otherwise, is that one true thing that will get you through.