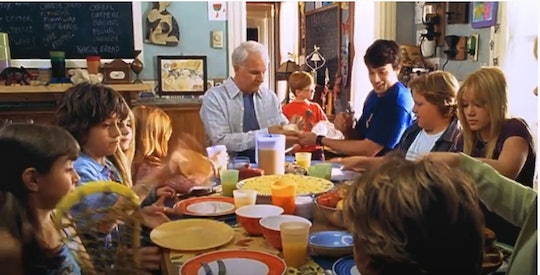 Hilary Duff, Bonnie Hunt, and more stars from the Cheaper By The Dozen cast reunited to recreate some of the beloved movie's famous scenes. But not only was seeing their faces again a nostalgic thrill, the sweet video shared on Wednesday is helping raise awareness for a charity that's working to feed hungry children.

On Twitter today, Hunt, who played mom Kate Baker in the 2003 version of Cheaper By The Dozen alongside Steve Martin as Tom Baker, shared a short video featuring several of her movie kids in some adorable then and now moments. Due to social distancing, each character sent in a video of them recreating a moment from the film from their homes.

Brent and Shane Kinsmen, who played twins Nigel and Kyle Baker, open the one-minute video montage by doing their famous flex to the sound of Simple Plan's "I'm Just A Kid" in the background. The video then moves on to Forest Landis, who played shy little Mark Baker, grimacing just like he did in the original.

On and on it went through fictional Baker kids, including some famous faces like Duff who played Lorraine Baker (but is still recognizable even behind her hilarious mud mask) and Piper Perabo who played Nora Baker. The sweet video ends with Hunt herself smiling from behind her computer.

"Surprise! From the Baker family to yours. We are all in this together. #wearefamily. Help feed families with us," Hunt captioned the video on Twitter, directing her followers to donate to No Kid Hungry, a charitable organization focused on ending childhood hunger in America.

No Kid Hungry also shared the video on Twitter and called it the "best surprise ever!"

"Thank you, Baker family, for being hunger heroes for kids! #ThankAHungerHero #WeAreFamily," the charity added.

Fans of the film, all about a family with 12 kids that was actually based on a true story written in 1948, were quick to share their excitement over seeing the cast back together (in a sense). "Omg this made me cry!! Just amazing!!!!" one fan tweeted, while another wrote, "Oh my gosh! This is amazing!!! I used to watch this movie multiple times a day!"

Sure, Steve Martin might have been missing from the video and, yes, it would have been nice to see Tom Welling, who played Charlie Baker, but still... seeing the rest of the Cheaper By The Dozen cast reunite for such a great cause was a lovely surprise indeed.