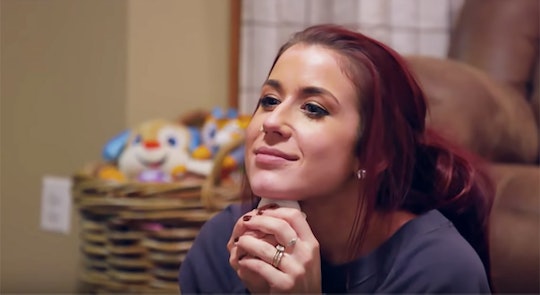 Teen Mom 2 star Chelsea Houska took to Instagram on Wednesday to share the happy news about her third delivery. Yep, after months of anticipation, Houska gave birth to a baby girl named Layne before her September due date. Exciting stuff, right? But wait — that's not all. It also turns out Chelsea Houska and her new baby share the same birthday of Aug. 29. Talk about the perfect birthday present.

When Houska announced her pregnancy in March, she revealed the little girl would arrive sometime in September. The possibility of a September baby was exciting to fans because Houska's 8-year-old daughter, Aubree, was born on Sept. 9, 2009. Although it would have been cute for the sisters to share birthdays, it looks like life had other plans for the family because Houska gave birth to Layne early on Aug. 29, her 27th birthday. What an adorable coincidence for Houska — I bet she'll enjoy celebrating her birthday with Layne in the years to come.

Of course, Houska addressed the serendipitous event on her Instagram account, captioning a precious shot of Layne: "Happy birthday to YOU, sweet baby Layne."

Houska's husband, Cole DeBoer, got in on the action too. He wrote to Instagram:

Houska's dad, Randy Houska, also chimed in with a joke:

"Damn, now I can forget 2 birthdays in the same day! Welcome to the world little Layne Ettie DeBoer. You have a large, wonderful family that will watch over you in your journeys. Congrats @ChelseaHouska, Cole, Aubree and Watson."

As it turns out, a lot of fans find Houska and Layne's shared birthdays to be incredibly sweet.

"Omg I loveeee! Love that you two now share a birthday and I loveeee her name," a fan gushed. "So unique and pretty 😍😍😍."

"Congratulations she is beautiful and how amazing to share the same birthday,' one person chimed in.

Happy birthday momma! Congrats on most special birthday gift anyone could ever have!" someone wrote. "@chelseahouska and @coledeboer you two made another beautiful baby for sure."

One supporter even went as far to claim they predicted Layne's birthday before the announcement went public. "Totally called you were having her today cause neither you or Cole had posted anything about it being your bday!" the TM2 sleuth said on Twitter. "Congrats mama shes perfect! And happy birthday to you ladies!"

Another interesting thing to note here is how the Houska-DeBoer clan has three Virgos on its roster at the moment. I find that detail particularly heartwarming because I'm one of three Virgos in my own family. DeBoer, an Aries, and Watson, an Aquarius, are lucky to have such grounded and earthy ladies in their corner.

Houska probably isn't surprised by the Virgo trend because a psychic hinted at this exact phenomenon in a past reading. " ... I was once told by a psychic that we would have a sweet boy that was just like Cole and then another girl that’s just like me and Aubree," Houska revealed in April, just one month after her pregnancy announcement.

Woah. Did anyone else get chills or is it just me? It appears the psychic's prediction came to fruition.

Congrats on your precious birthday twin, mama! You have a lot to celebrate today, and fans are incredibly happy for you.