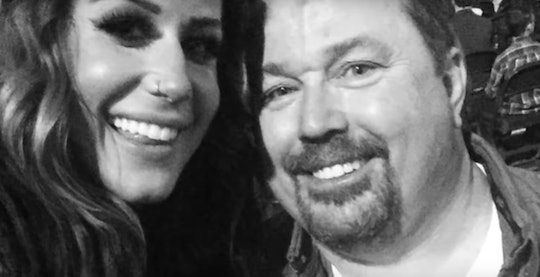 The Houska and DeBoer families have a lot to celebrate right now. After welcoming a new daughter and granddaughter into the bunch, the Teen Mom clan is sharing their joy and elation with all of their fans, but one family member is getting a bit more attention than others. In fact, Chelsea Houska's dad's tweet about her new baby's birth has "dad joke" written all over it, but TBH, that makes it all the more endearing.

Randy Houska took to his personal Twitter and Instagram pages to share photos of himself, his wife and their newest granddaughter. "Damn, now I can forget 2 birthdays in the same day!!" he wrote. "Welcome to the world little Layne Ettie DeBoer. You have a large, wonderful family that will watch over you in your journeys. Congrats @ChelseaHouska, Cole, Aubree and Watson." He is referring, of course, to the fact that Houska gave birth to her third child on Wednesday, Aug. 29, which also happens to be her own birthday, as In Touch Weekly reported.

Her dad also posted a photo of himself with the new baby on his Instagram. "Looky what we found!!" he joked again. Fans immediately clamored to wish the family well, saying things like: "Congratulations! She is gorgeous! Welcome baby Layne 💕👶🏼 @chelseahouska@coledeboer are amazing parents! I bet Aubs & Watson are excited," and "I'm a big fan of your daughters and Coles the whole fam. Really I love the babies name, I wanna hear how they came up with her name so unique."

E! News reported on Wednesday that after weeks of anticipation, Houska gave birth to her third child, a daughter, with husband Cole DeBoer. Both parents announced the baby's safe delivery on Instagram, with Houska saying: "Happy birthday to YOU, sweet baby Layne," and her husband reposting the photo adding: "Happy birthday to my sweet perfect wife Chelsea DeBoer @chelseahouska who just gave our family this beautiful blessing! Sharing the same amazing day I am so in love with our family! Our newest edition Baby Layne!!"

In the comments of her post, Houska confirmed for fans that "Layne" is in fact pronounced as it looks (like "Lane") and that her daughter's middle name is Ettie.

Though the family is, at this point, pretty well adjusted to being in the spotlight (the world was introduced to Houska when she was pregnant with her first child on Teen Mom) her parents have been on the receiving end of some criticism lately. In Touch Weekly reported that Houska's dad, Randy, was accused by fans of living off of his daughter's fame, which he promptly shut down, tweeting: "Lol. I am living on 4 years of college, 4 years dental school and 29 years of being a dentist." (Get 'em, Randy.)

But Randy has genuinely built a social media following of his own (he currently has over 300,000 followers on Instagram alone) both from documenting his life with his daughter and grandkids, as well as his own health and fitness journey, which he vlogs about on YouTube. In Touch Weekly reported in July that he and his wife had already lost a combined 100 pounds between the two of them.

The new grandparents are indeed continuing to document their health and fitness journeys online, but never failing to update fans on their outings with the grandkids. It seems like Layne will fit in just fine.