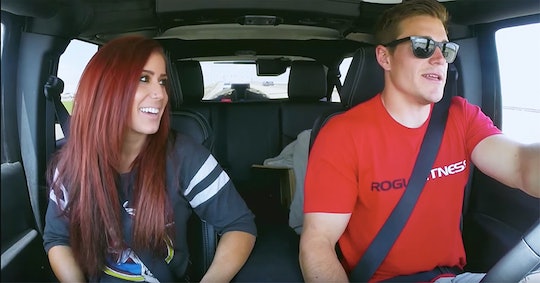 Teen Mom 2 Star Chelsea Houska spent her 27th birthday on Wednesday giving birth to her third child, a little girl named Layne. No one is happier about the delivery than Houska's husband, Cole DeBoer, who already *adores* their new baby. Houska captured DeBoer's "obsession" with little Layne in a cute photo she shared to her Instagram Stories on Thursday. In the precious pic, DeBoer lovingly stares at Layne while she gets her first pictures taken. The sweet image is one for the history books, TM2 fans.

DeBoer wasn't kidding when he gushed about how in love he is with his growing family. Just one day after DeBoer wrote the message, Houska shared a snap of the proud dad gazing at baby Layne during her first photoshoot. "Someone's obsessed," Houska said about the heartwarming moment.

Be still my heart. I don't think Houska could have chosen a more appropriate or adorable pic to highlight DeBoer's overwhelming love for baby Layne. And arguably the best part about the pic is that it's candid. There's nothing better than catching a doting parent in a tender moment like this one.

DeBoer's obsession with Layne shouldn't come as a surprise to longtime fans of TM2. Not only is DeBoer an amazing father figure to Houska's 8-year-old daughter, Aubree, but he's over-the-moon about the couple's 1-year-old son, Watson.

"Honestly the love I have for this little man is outrageous!!!" DeBoer commented on ridiculously cute photo of baby Watson, shortly after he was born in February 2017. "It hurts 😍 @chelseahouska."

DeBoer's love for his kiddos hasn't gone unoticed by Houska. In a Father's Day post from June 2017, Houska wrote on Instagram:

This man. I don't even know where begin...I am so proud to be raising children with you. I could not have asked for a better role model for our kids to look up to. Someday, I hope Aubree finds a man like you...and I hope our son turns out to be JUST like you. I love you with all my heart and more! Happy happy Father's Day ❤️ @coledeboer.

Yep, it's clear Houska and her children — including baby Layne — are very lucky to have DeBoer in their lives.

Fans are also aware of how fortunate little Layne is to have DeBoer as a dad.

"The world needs more Coles! This man is so awesome," one person said on the Teen Mom Reddit.

Another fan chimed in: "He is such a sweetheart!!"

" ... Where did cole even come from....he seems to good to true," a commenter joked. "Glad they found each other."

"I don't care what people say about his voice, I think Cole is the sweetest, and Chelsea is incredibly lucky to have him!" someone else wrote.

Of course, I expect Houska to share more photos of DeBoer doting on Layne in the days to come, and I think it's safe to say fans can't wait for the precious snaps highlighting the father and daughter's already strong bond.