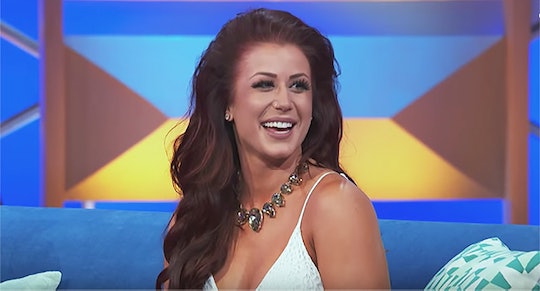 It's no secret Teen Mom 2 star Chelsea Houska is a busy mama these days. Houska just gave birth to her third child, Layne Ettie, on Aug. 29, and she also has Watson, 1, and Aubree, 8, to parent. Although Houska has an amazing co-parent in her husband, Cole Deboer, he returned to work on Thursday, leaving her alone for the first time since Layne's birth. And Chelsea Houska's tweet about parenting three kids solo for the first time is hitting home for parents in a hilarious way.

Luckily for fans, the cuteness didn't stop there — Houska has shared many snaps of Layne since her arrival, as well as some adorable tweets detailing her new life a as a mom of three. And on Thursday, Houska received a lot of positive feedback from parents when she tweeted a funny and heartwarming message about parenting her young brood for the first time without DeBoer. She tweeted:

It was Cole’s first day back at work since Layne was born and I’m very proud to say that I got Aubree to school on time AND I took a shower....but are the little kids still in their jammies? Maybe.

Congrats on your victories, mama. It's no easy feat getting your kids to school on time as it is, but it's especially difficult when you have two babies attached to your hip. I'd say Houska aced her first morning sans DeBoer, even though her babies never left their "jammies." Daytime clothes are overrated, anyways.

"My daughter is 2 and we both leave the house in jammies to drop off my son at school," one parent shared.

Someone else joked: "I only have two kids and neither one go to school yet so I’ve literally been home all day and they are both STILL in their jammies. Haha!"

"I never did and still don’t put my son in clothes unless we go out," a supporter pointed out. "No need to make more laundry for myself."

Others praised Houska for her parenting victories.

"You took a shower with a newborn that's winning in my book," one person wrote.

Another commenter chimed in: "Super Mom! I have 4, and just leaving the house is no small feat!"

Although Houska is perfectly capable to parent her kiddos without DeBoer, it's safe to assume she misses his presence around the house. Case in point: Just three days before DeBoer resumed work (he earns a living as a traffic control specialist), Houska penned a message praising her husband. She captioned an Instagram shot of DeBoer cradling Layne:

This man is so perfect for me. The most amazing husband and daddy in the entire world. I love how much he loves us 😍.

Aww. It's clear Houska and DeBoer have an amazing relationship, especially where it concerns co-parenting. But as much as the two are on the same team, they still "bicker" from time to time. Houska explained while on the Coffee Convos podcast:

We definitely bicker. Usually it’s because I’m in a hurry and I’m late for everything, so I get really frustrated that he takes more time to get ready than I take to get ready and get the kids ready. He can be very pokey. Like, he’ll be hanging around, having a snack and I’ll be like, "Let’s go!"

Ha ... maybe it's for the best DeBoer is back at work. Like many parents out there, I bet Houska prefers to stick to her own routine during the school year.

On that note, here's to many more successful parenting moments in Houska's future. It's clear the mama is killing it as a mom of three, jammies and all.