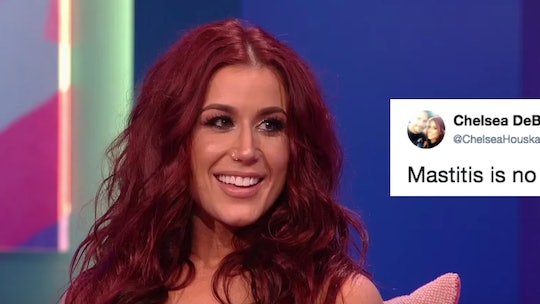 Last month, Teen Mom 2 star Chelsea Houska welcomed her third child, a baby girl named Layne Ettie DeBoer. And even though she is clearly over the moon to be a mom of three, that doesn't mean motherhood hasn't presented challenges. For example, Chelsea Houska recently tweeted about experiencing mastitis — and plenty of fellow mamas can relate.

On Friday, Houska lamented about mastitis on Twitter. "Mastitis is no joke 😩," she tweeted.

Mastitis is an often-painful infection of the breast tissue that affects 1 to 3 percent of breastfeeding mothers, according to WebMD. The most common cause of mastitis is when bacteria gets into a milk duct through a crack in the nipple, usually from the baby's mouth. Symptoms include tenderness, swelling, burning or pain (usually while breastfeeding, and sometimes even continuously), redness, and a fever, according to the Mayo Clinic. WebMD adds that other symptoms include body aches, fatigue, chills, pus coming out of the nipple, and a tender lump in the breast.

Friday just happened to be Houska's eldest child Aubree's 9th birthday, and Houska felt terrible about being sick from the "nastiness" of mastitis on her daughter's special day. "I felt so bad being so sick on Aubree's birthday but I'm so grateful for my parents who helped make her feel special and I can’t wait to give her the BEST day once I'm over this nastiness 😩," she tweeted.

Many moms replied to Houska to let her know that they have been there too. "So sorry! I’d rather give birth all over than have mastitis again. 😭," one fan responded. "I literally JUST said this to Cole! 😩," Houska wrote back, referring to her husband, Cole DeBoer.

"One of the worst pains! Hope it clears up fast for you!! 💕" another fan wrote to Houska. "I never knew it was this awful!" Houska responded.

"Legit thought I might die from this," another fan wrote, referring to the pain she experienced from mastitis. "I’ve felt the same today," Houska responded.

Plenty of fans chimed in with their tried-and-true home remedies for mastitis. "Have you tried dangle feeding? Lay the baby on the bed and dangle over her while nursing! Seriously you’ll feel crazy but it works!!" one fan suggested. "Get a hand pump and pump in a hot shower as hot as you can stand it. Heat helps with the clog and so does pumping. It’s life saving I promise!" another added. "Nurse/pump through the pain girl," another suggested.

A few fans gave Houska a suggestion that they swear by — even though it sounds pretty funny at first.

"Sooooo this will sound super weird, but if you have a 'bullet' massager/vibrator or something of the sort, use it on the breast. It'll help break up the clogged milk duct/s. Don't ask how I know 🙊😂," another fan wrote. Houska was clearly amused/intrigued by the suggestion, because she responded with two laughing emoji: "😂😂."

On Houska's birthday, Aug. 29, she gave birth to baby Layne, meaning she and her daughter are exactly 27 years apart. "Happy birthday to YOU, sweet baby Layne 🖤," Houska captioned a photo of her newborn on their birthday.

Houska has continued to document Layne's first two weeks of life on Instagram, and her love for her baby girl is obvious. Hopefully her mastitis clears up soon so she can focus on enjoying her time with baby Layne.