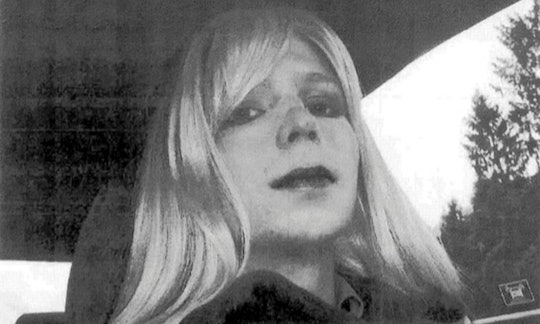 In the first full 2 hours since her release from military prison, Chelsea Manning has joined Instagram, had a pizza, and generally just getting used to the world she hasn't been a part of for the past seven years. On Thursday, Chelsea Manning shared her first selfie, presenting for the first time publicly as a woman. "Okay, so here I am everyone!!" she captioned the photo, adding the hashtag "#HelloWorld." I'm not crying — you're crying.

Against a wooden background, Manning's portrait is classically composed: In it, she dons a short pixie style haircut, wearing a black deep v-neck sweater with a zippered-down neckline. Her makeup game is on point, too, with just some minimal eyeshadow and a bright, poppy colored lip. Manning looks right into the camera with a confident gaze and just the slightest of smiles. Tyra Banks, eat your heart out: The smize is strong with this one.

Manning posted her first photo after her release on Wednesday: Just a simple photo of her Chuck Taylors, with the caption "First steps of freedom!" Since that first photo, supporters and followers of her new Instagram account have been bombarding her with requests for a selfie. After photos of herself enjoying a celebratory glass of champagne and her first slice of pepperoni pizza post-prison, Manning finally stepped in front of the camera to show herself to the world as who she is.

I'm welling up with tears again. It really is a beautiful photo, and a milestone for not just Manning herself, but for the trans community. Manning first publicly identified as female in 2013, telling The TODAY Show "I am Chelsea Manning" in a statement. She stated her desire to begin hormone therapy as soon as possible at the time, in order to start her transition. Her request for hormone therapy was initially denied by the Army while she served her sentence at a Fort Leavenworth, Kansas military prison. But in early 2015, the Army approved Manning to undergo hormone therapy as part of her treatment for gender dysphoria disorder.

Even though Manning's leaking classified U.S. government documents paved the way for the initial success of Wikileaks, she also broke the law, making her a controversial figure. But for many in the trans community, Chelsea Manning is a hero. While taking responsibility for her crimes, she came out as a trans woman who faced serving 35 years in an all-male military prison. In January, President Obama commuted the remainder of her sentence, as one of his last acts in office. Obama's act of clemency may have very well saved her life: Manning twice attempted suicide while in prison.

Now that Chelsea Manning is finally a free woman, she gets to do all the normal things she's been missing out on — see pepperoni pizza. But more importantly, she's finally free to present herself to the world as the woman she was always meant to be.

Well done, Chelsea. It's lovely to see you as you are.