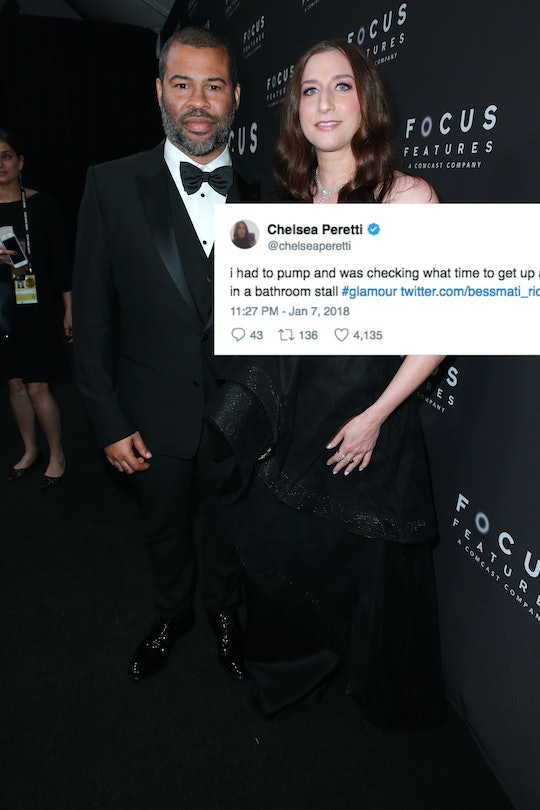 One of the trickiest parts about being a breastfeeding new mom? It can be pretty inconvenient, especially when you're stuck needing to pump on a baby-free night out. And judging by Chelsea Peretti's tweet about pumping at the Golden Globes, that seems to be true even when you're a television actress at a major red carpet award ceremony. On Sunday night, a Twitter user called out Peretti for appearing to check her phone while sitting in the audience, but the Brooklyn Nine-Nine star had a pretty solid explanation: she had to pump, and was trying to figure out when that had to happen (or, perhaps more accurately, how long she could realistically push it until she could no longer wait anymore). If you've ever been stranded in public with rapidly engorging boobs, that admission was likely totally validating — apparently, celebs have to grapple with their iPhone breastfeeding timers, too. But Peretti's tweet also acknowledged another truth about breastfeeding that is actually pretty rage-inducing: even at the Golden Globes, Peretti said she got stuck pumping breast milk in the bathroom.

Unfortunately, and as many pumping moms will tell you, that's a reality that's not even sort of uncommon. Even though the need to pump is about as easy to physically ignore as putting off the need to pee when you've chugged a few gallons of water, it's often viewed as little more than a pesky inconvenience not particularly deserving of accommodation. And, really, there's probably nothing that proves that more than the fact that women are often expected to pump (or even straight up breastfeed their babies) while sitting on a public toilet.

Likely because of that infuriating reality (one which far too many women have experienced first-hand), it didn't take long for users to jump in and point out how completely outrageous it is that, at the Golden Globe awards — which were being used as a platform this year to stand against sexual violence and gender inequality — there was still a total lack of accommodation for nursing mothers:

Peretti herself also weighed in on the absurdity, and noted that when she did finally get up to pump in a bathroom stall, she ended up missing Oprah Winfrey's Cecile B. DeMille Award acceptance speech (arguably one of the most impressive moments of the entire night):

In all fairness, there are still worse things to experience than having to step out of a room full of celebrities watching Winfrey deliver an unsurprisingly brilliant speech to go and pump breastmilk, and I'd imagine that, if you did have to pump in a bathroom, you could probably do a lot worse than the bathroom at the Golden Globes. But that's entirely beside the point. More than anything, Peretti's admission highlighted the fact that in most cases, breastfeeding still isn't considered important enough to be considered worthy of a dedicated, private space — even while women simultaneously face pressure to exclusively breastfeed their children instead of using formula, no matter how much discomfort or difficulty they encounter.

Under President Barack Obama's Affordable Care Act (ACA) the rights of many breastfeeding employees are protected by law, according to the National Conference of State Legislatures (NCSL), entitling them to "reasonable" break time for pumping or breastfeeding for up to a year after the child's birth (though it's not necessarily paid break time), as well as private space in which to do so (that isn't a bathroom). Many state laws also allow breastfeeding employees to store their expressed milk at the workplace.

Yet even with the laws, many women have shared that, in practice, it doesn't always work out as it should. In May 2017, The Washington Post shared responses it received from readers who had pumped at work after giving birth, and honestly, many of them made pumping in the bathroom at the Golden Globes sound like a dream. Virginia mom Germaine Schaefer wrote, for example, that the so-called "pumping room" at her office "was a single-stall bathroom that they stuck a chair in," while an Oregon mom who chose to remain anonymous "in fear of retribution" wrote that while she "had a decent, private space" in which to pump, she "was only allowed [her] break times and lunch to pump," or else she'd either have her pay docked, or be "written up for using too much break time."

In general the thought of pumping milk in a bathroom stall is both degrading and also gross (I mean, it's literally your child's food). But in many cases, the ick factor is far from just being hypothetical: one teacher from Mississippi told The Washington Post that she ultimately chose to pump at her desk where she has little privacy (there are literally cameras in the classroom), because her only other option was the bathroom, where "there have been large roaches spotted."

Peretti's post about her Golden Globes pumping experience may at once be the most relatable and unrelatable parenting tweet ever (I mean, how many people can actually say they've pumped breast milk at a major Hollywood award ceremony?), and honestly, she may not have even intended for the comment to make a point about the unfair treatment of breastfeeding moms. But for all the other women who know all too well what it's like to struggle to feed your child or use a breast pump in a bathroom, a sketchy "lactation room," or even in public where people feel the need to stare or offer up judgmental, unsolicited commentary, it was an important reminder that as much as we like to remind women that "breast is best," we certainly don't make it easy for them to actually follow that wisdom.