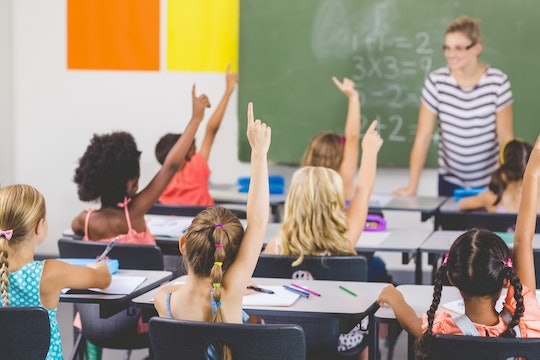 Childhood Obesity Could Affect The Way Your Child Learns, According To This New Study

It's no surprise to anyone that childhood obesity has become a serious epidemic in the United States. The easy availability of calorie-laden foods and drinks hasn't helped the situation, nor has the constant marketing of fast food to kids on every media platform available. While parents are justifiably concerned about the many physical and emotional side effects inherent to childhood obesity, it seems there's a newly discovered cause for concern. Childhood obesity could affect the way your child learns, according to a recent study by Brown University.

The Centers for Disease Control and Prevention reported more than 12.7 million children in America (around 17 percent of all American children between the ages of 2 to 19) would be considered obese or overweight as of 2014, and that number continues to climb. For a child to be considered obese, their BMI (Body Mass Index) would need to be above the 95th percentile for their sex and age-specific clinical growth chart.

While most of the children struggling with early-life obesity were between the ages of 12 to 19, a full 9 percent of kids aged 2 to 9 were still considered obese. And a new study out of Brown University found that being obese this early in life could cause serious complications down the road.

Nan Li, lead author of the study and a postdoctoral research associate in Brown’s Department of Epidemiology, worked with a team of researchers to look at how early-life obesity might affect school-aged children down the road. And what they discovered was worrisome; children who were overweight or obese in the first two years of their life had lower reasoning skills, struggled more with perception, and worse working memories than their leaner same-age children when tested between the ages of 5 to 8 years old.

According to the study, severe weight gain can change the way our hormones work in several areas of the brain. Obesity has been linked to reduced cognitive abilities in adults, and Li's research team looked at children in Cincinatti to see whether or not the same held true with children. To get a full sense of the picture, the research team looked at children whose weight before the age of two years old was known and were followed over time via home visits by trained staff. The children also underwent a series of cognitive tests like a series of computerized games to measure a child's spatial-visual memory, sequencing tests to determine working memory, and tests to assess perceptual reasoning.

While researchers found that weight status did not necessarily change the way children performed in some tests, it did seem to make a significant difference in three areas: IQ, working memory, and perceptual reasoning. As Li told Brown University:

Now it's important to note that this study was relatively limited in size because the researchers were focused on a small group of children. But the results of the study are still relatively concerning. Researchers have long known that childhood obesity can have many negative, far-reaching consequences. Beyond the physical limitations like Type 2 diabetes and cardiovascular problems, children who struggle with their weight early in life can also suffer from low self-esteem, body dissatisfaction, and emotional problems, according to the National Center for Biotechnology Information. And now, it seems, their learning capabilities might also be affected by a higher weight-to-height ratio in their early years.

We live in a fast food world, and it's all too easy to keep kids happy with sugary treats and fatty food. But this study is yet another reason to think twice about the dietary decisions we make for our kids.