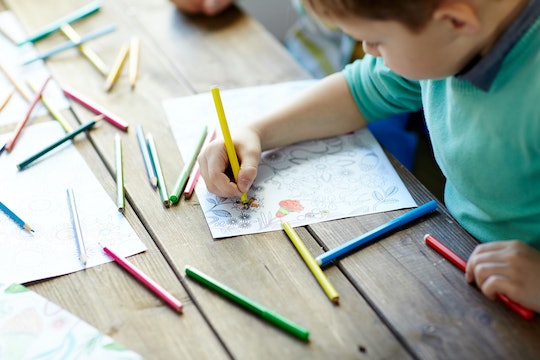 Some Kids Aren't Strong Enough To Hold Pencils, Study Says, & The Reason Why Is Pretty Scary

In today's world, everything is driven by technology, from the way people communicate to the way people parent. In fact, it's not uncommon for parents to use apps on their phone or tables to teach their kids their 1-2-3s and ABCs. And over the last two decades, more and more teachers have begun to use technology as a way to educate children, big and small. But relying on technology may come at a cost: Experts warn that children can't hold pencils because of iPads. They say excessive tablet and cell phone use is slowing down muscle development.

Pediatricians in the United Kingdom have recently claimed that children's finger muscles are not developing properly because of overuse of touchscreen phones and tablets at home, according to The Guardian. Continuous use of handheld technology has caused kids to have weak finger muscle control, which makes it harder for them to hold a pen or pencil the right way and write legibly.

Sally Payne, the head pediatric occupational therapist at the Heart of England NHS Foundation Trust, told The Guardian that, in order to be able "to grip a pencil and move it, you need strong control of the fine muscles in your fingers." "Children are not coming into school with the hand strength and dexterity they had 10 years ago," Payne said.

Payne continued, according to The Guardian,

It’s easier to give a child an iPad than encouraging them to do muscle-building play such as building blocks, cutting and sticking, or pulling toys and ropes. Because of this, they’re not developing the underlying foundation skills they need to grip and hold a pencil.

This is not the first time parents have been cautioned about excessive tablet use affecting muscle development. In 2013, a group of Australian teachers had warned that students may not perform well in the country's National Assessment Program Literacy and Numeracy (NAPLAN) tests because they lack the necessary arm strength and skills to write clear answers quickly, according to Tech Times. The teachers claimed the weak arm strength was do to "their reliance on technology and their inactive lifestyle," Tech Times reported.

Karin Bishop, an assistant director at the Royal College of Occupational Therapists, told The Guardian,

It is undeniable that technology has changed the world where our children are growing up. Whilst there are many positive aspects to the use of technology, there is growing evidence on the impact of more sedentary lifestyles and increasing virtual social interaction, as children spend more time indoors online and less time physically participating in active occupations.

Research has also documented other ways in which technology impacts a child's development and muscle strength. A 2010 Pediatrics study, for example, found that kids who play video games and watch television are more likely to have issues with concentration. And a 2015 study published by the Boston University School of Medicine suggested that kids who are given smartphones or tablets as a way to calm down may have poor impulse control later on in life.

But for all its negative effects, technology also has its benefits. Tablets can be used to make learning more accessible to children with disabilities who have learning needs that a traditional classroom setting can't meet. They can also help kids with autism who are overwhelmed by social settings, or help them understand complex situations, according to CNN.

As a working mom, I understand relying on technology to help your child learn and keep them entertained. But I am also aware of the downsides of giving my son my tablet to use. The key here is finding a balance that works for your family; for example, cutting down on screen-time while scheduling handwriting lessons at home. After all, we live in a technological-driven world, and won't be able to get away from that anytime soon.

More Like This
What Parents Need To Know After DEA Issues Warning About "Rainbow Fentanyl"
New Report Shows 80% Of Pregnancy-Related Deaths Are Preventable
Experts Explain Whether It’s Safe For Your Baby To Sleep On Your Chest
Can You Mix Breast Milk & Formula? Experts Weigh In