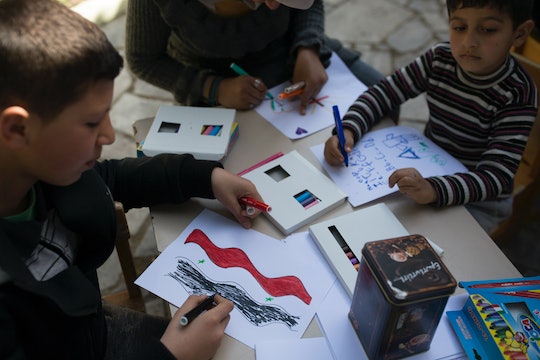 Whoa — Kids Draw Pictures Of Themselves Differently Depending On Who's Looking

It's no real news that children's minds are far more complicated than we sometimes might think. It's easy enough to see your kid playing Fortnite or whatever, zoning out in front of their screens, and assume they're not really taking in their surroundings on a deeper level. But this is not necessarily the case. In fact, a recent study looked at the way children draw themselves depending on their audience, and it seems as though their self-awareness might be tied to exterior influences in some pretty subliminal ways.

Researchers at the University of Chichester Psychology Department in the United Kingdom recently looked at the way children draw themselves in different groups; one where their audience wasn't specified and then six with either men they knew, men they didn't, and people in professions the children would recognize as authoritative like teachers and police officers. The study group was composed of boys and girls all around eight and nine years of age, 85 boys and 90 girls. They were asked to draw self-portraits in three different ways; one happy, one sad, and one baseline picture. Looking at the way children draw themselves offers some interesting insight into the way they see themselves in general, particularly when they are engaging with different types of people.

According to this study, which was published on Friday in the British Journal of Developmental Psychology, audience appeared to have a distinct effect on the way children were drawing themselves. For instance when children were drawing for an audience they recognized they made their self portraits more expressive. And on average, girls tended to be more expressive with their drawings in general than the boys in the group.

Lead author of the study Dr Esther Burkitt told Science Daily that she believes this could help professionals use children's drawings as a way to "supplement communication" in the future, especially when taking into account that children will draw differently with a different audience:

Being aware that children may draw emotions differently for different professional groups may help practitioners to better understand what a child feels about the topics being drawn. This awareness could provide the basis of a discussion with the child about why they drew certain information for certain people. Our findings indicate that it matters for which profession children think they are drawing themselves, and whether they are familiar with a member of that profession.

Children have a strong sense of self, this we know for sure. As a 2017 study from New York University found, they are aware of their own abilities and habits from a very young age. And now we know that this sense of self is genuinely affected by their audience; if this isn't a solid case for trying to ensure your children are surrounded by positive people, I'm not sure what is.