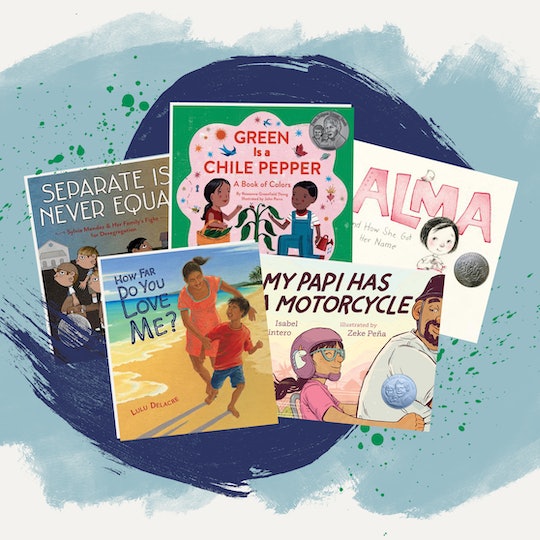 A young boy becomes a world champion lucha libre wrestler. A giant bubblegum bubble carries a girl on a fantastical journey. Another child loses her mother's ring in a giant batch of tamales and has a feast to find it. These children’s books with Latinx characters not only tell stories that help Latinx children feel seen, but could easily become any kid's favorite bedtime story.

More Like This
32 Children's Books With Asian Characters That Celebrate Heritage, Joy, and Childhood
6 Books To Read If You're Thinking About Adopting
Exclusive Look At Nabela Noor’s Debut Children’s Book Beautifully Me
The Delightful Wreckage Of Casey Wilson's Presence

We Need Diverse Books, a nonprofit that advocates for changes in the children’s publishing industry, shared statistics with Romper from a 2019 survey by the Cooperative Children's Book Center. The survey found that the percentage of kids’ books with white protagonists was 41.8%, while Latinx protagonists only starred in 5.3% of books. “For many children, a book can be the first time they see their identity or experiences affirmed, especially if representation in other media is lacking,” Nicole Johnson, executive director of We Need Diverse Books, told Romper. “Too often, diverse characters are missing from books and other media, leading kids to wonder why they don't see themselves. Over time, a child can begin to feel invisible and that their experiences do not belong.”

Johnson also suggests that when choosing children’s books, parents should keep in mind the broad range of experiences and backgrounds that exists within the Latinx community.

The following 27 children's books were recommended by The Latina Book Club, We Need Diverse Books, In Culture Parent and Coloursofus.com, Social Justice Books, and Latinxs In Kid Lit to do just that.