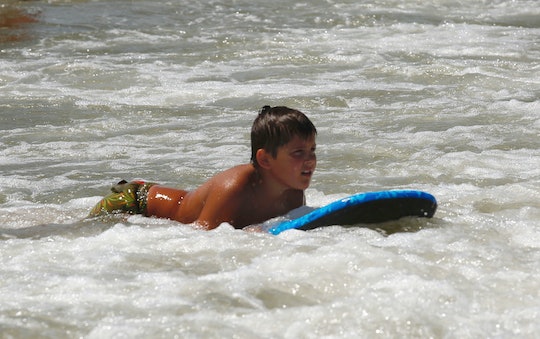 You know the stereotype already, I'm sure: Toddlers never stop moving, teenagers don't move at all. There's clearly some truth to that. Just watch any parent of a toddler trying to wrestle them to the ground to eat their supper, or the parent of a teen begging them to go for a hike. I've been there for both. But what about those in-between years? When does all of that energy begin to decline? According to a new study, children's physical activity declines after age 7 — right around the age when kids can actually focus on television for more that 10 minutes at a time, coincidentally.

The study, which was published in the British Journal of Sports Medicine, followed 545 children living in the U.K. for eight years, from 7 years old to 15 years old. For eight years, the participants wore an accelerometer to track their level of activity for a week at a time (taking it off while they slept) and then measured the activity at ages 7, 9, 12, and 15. Children are supposed to get at least one hour of activity a day, and the 7-year-old participants were found to get at least that amount (the average for 7-year-old boys in the study was 75 minutes a day; for girls of the same age, 63 minutes). But after age 7... things began to drop off.

The lead author of the study, Prof. John Reilly from the University of Strathclyde in northern England, pointed to a potentially serious issue behind the marked drop off in activity: school. Reilly told the BBC:

Reilly noted that the activity level was replaced with sitting for the most part, and that there was no real discernible difference in how often the 12-year-olds were active compared to the teenagers. Which means the problem starts much earlier.

As children continue to have more and more sedentary options to keep them entertained (video games, the internet), it can be more difficult to pull them away from the lure of their screens. But their future health depends on it; A lack of physical activity early in life sets a dangerous trend for later on down the road. The Centers for Disease Control and Prevention recommends:

There are lots of ways to keep your kids active without making them aware that you're trying to keep them active — hiking, biking, wall climbing, swimming.

And if all else fails? Buy a puppy. Puppies are always a good idea.