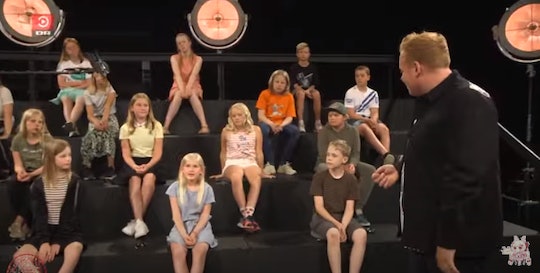 Ultra Strips Down, a Danish children's TV show that features naked adults with the idea of teaching kids about body positivity, has sparked heated controversy online in recent weeks. The channel the show airs on, however, has pushed back on criticism and has defended the television program as "educational."

In Ultra Strips Down, which airs on the on-demand children's channel Ultra in Denmark, features regular adults standing naked in front of a room full of kids between the ages of 11 and 13 to answer questions about their bodies and how they see themselves, according to The Independent. One recent Ultra Strips Down episode that was shared on YouTube features a man with a prosthetic leg, older adults, and people with scars or tattoos.

Every episode introduces a different topic of discussion for students from the Orestad School to ask five adults with different body types, all of whom arrive in bathrobes before stripping down, questions about their bodies, as The Telegraph reported. According to The New York Times, kids have asked questions like, "At what age did you grow hair on the lower parts of your body?" or "Do you consider removing your tattoos?"

The concept of the show is to encourage kids to ask questions as well as see "natural" adult bodies, as the show's host Jannik Schow told The New York Times. "Perhaps some people are like, ‘Oh, my God, they are combining nakedness and kids," Schow explained to the newspaper. "But this has nothing to do with sex, it’s about seeing the body as natural, the way kids do."

The show might be entering its second season in Denmark due to its popularity, according to The Daily Mirror, but Ultra Strips Down is being hit with heavy criticism online. "Excuse me WHAT THE HELL!? I know we are more welcoming towards nudity than America but this is a bit too much," one Danish social media user tweeted.

Another said they believed Ultra Strips Down was "pushing to destroy" children. "... The show claims to teach kids about different body types by exposing them to naked adults! Why? Why are there now so many pushing to destroy children?" they tweeted.

In a statement to Buzz.ie regarding the backlash, Ultra, the channel the show airs on, said Ultra Strips Down is for families: ''This is educational TV for kids and families who can have a healthy talk about what bodies look like."