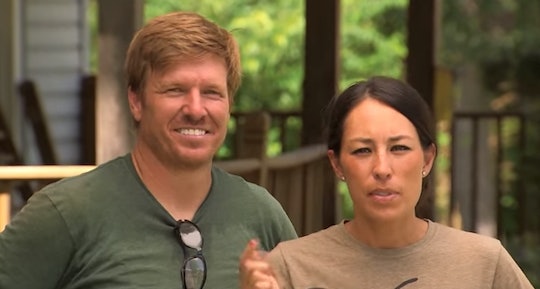 Chip Gaines might make his living as arguably one of the most famous contractors in the country, but these days it seems that fixing houses is the furthest thing from his mind. These days, the Fixer Upper star is all about those babies. And not just the human kind either... all kinds of babies, which is pretty adorable. On Tuesday Chip Gaines posted to Instagram about babies on the farm, because that man is all about new life this summer.

Chip and his wife, cookbook author and designer Joanna Gaines, welcomed their fifth child on Saturday. Their newest addition, Crew Gaines (also who saw that name coming?) joins big sisters, 8-year-old Emmie Kay and 11-year-old Ella, plus big brothers, 9-year-old Duke and 13-year-old Drake. Chip Gaines initially announced young Crew's birth with a tweet on Saturday that read, "And then there were 5.. The Gaines crew is now 1 stronger! 10 beautiful toes and 10 beautiful fingers all accounted for, and big momma is doing great! #blessedbeyondbelief." And it seems the family has been even more blessed since then. The proud dad posted a picture of another member of the Gaines clan with her new babies and the caption, "Errbody having babies round here #farmlife."

The family pig apparently welcomed a whole bunch of darling little pink piglets, and while that is obviously not the same as having a human baby I think it speaks to Chip's mindset these days. He's all about his family.

And no wonder, when he just welcomed this sweet little boy.

In the months and weeks leading up to young Crew's arrival, Chip has been frequently taking to social media to enthuse about his family and #farmlife in general. He shared a gorgeous sunset photo that his daughter Ella took last week, shared pictures from a fishing trip he took with his sons, and a golf afternoon with sons Duke and Drake with the caption:

I’m not going to lie.. I absolutely HATE golf. My nemesis sport, the antibaseball. But you know what I don’t hate, time well spent with these beautiful boys. #doSomething

Chip and Joanna Gaines have always seemed like two people who truly love hanging out with their kids, although not everyone has always been so convinced. An opinion article written by Daryl Austin for USA Today back in April questioned whether or not the Gaines were really putting family first, what with their businesses and celebrity status and all the rest of it. While the Fixer Upper star tends to generally give the impression of being cool and unflappable in the face of criticism, that's not the case when it comes to his family. Chip Gaines took to Twitter to vehemently defend his love for his family and his right to pursue a successful career:

In the wake of Gaines' insistence that he would "shut this circus down so fast it will make your head spin" if he thought it was affecting his family, Austin apologized. Because having a successful career and a happy, well-loved family do not have to be mutually exclusive. And because Chip Gaines is clearly a dad who just loves being around his kids.

Especially these days now that baby Crew Gaines has joined the... well, crew. And Chip isn't the only member of the Gaines family who is seriously pumped about the new baby. Joanna Gaines shared a picture on Instagram of her four kids waiting outside her hospital room door for news of their baby brother on Sunday.

If that picture isn't solid proof that the Gaines family is united in their baby obsession and their time together this summer, I don't know what is.