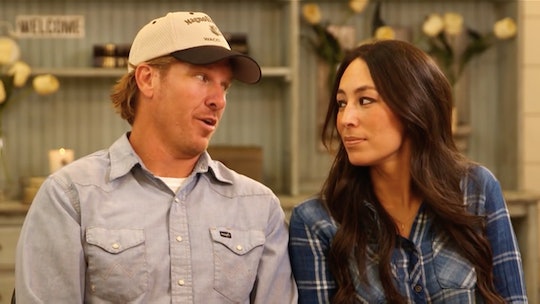 Chip & Joanna Gaines Are Expecting Baby No. 5 & Their Reveal Is Hilariously Cute

On Tuesday evening, the stars of the beloved HGTV hit Fixer Upper shared some really big news with fans. In a hilariously cute Instagram reveal, Chip and Joanna Gaines announced they're expecting their fifth child! "Gaines party of 7.. (If you’re still confused.. WE ARE PREGNANT)," Chip captioned the sweet shot of them showcasing both of their "bumps." Needless to say, fans are ecstatic to hear the news.

Chip and Joanna are already the proud parents to four children; their two daughters, Ella Rose and Emmie Kay, and two sons, Duke and Drake, all of whom are between the ages of 7 and 12. While this news is beyond exciting for the famous duo's bounty of fans, Chip did drop a few hints recently that a bigger family might be in cards for them. In fact, according to People, during an appearance on Houston ABC news affiliate, KTRK, back in November, Chip said now that he and Joanna had decided to leave their wildly successful reality series, Fixer Upper, he was "really excited to go back and try to maybe... try to make some more babies."

And it seems as though Chip may have been teasing fans, because, at the time, the dad-to-be told KTRK in the same interview that he and Joanna "have different answers" about the possibility of more babies in the future. Whatever may have been the case a few months ago, fans are totally eating up Chip and Joanna's super sweet, totally on-brand pregnancy reveal.

Within minutes of posting the exciting news, hundreds of fans shared congratulatory messages to the expectant parents and more than 600,000 people had liked the photo as of Tuesday evening. "Oh my gosh my dream come true!!!!!" one fan commented, while another wrote, "Oh hallelujah! Just happy hallelujahs!"

Chip and Joanna's pregnancy news comes months after they had announced that the fifth season of Fixer Upper will be its last, according to People. Fans started to quickly speculate about why the pair had decided to end their hit show, but both Joanna and Chip had set the record straight on several different occasions after the news broke.

Joanna told People in September that she and Chip wanted their four young kids to be able to enjoy their childhoods, outside of the spotlight. "They’re so young, and we want to give them the chance to have a normal childhood ... Family is the most important thing in the world," she told the publication. The expectant mama also previously told E! News back in October:

Time with our family is the most important thing to us...We are pretty headstrong and when we feel like it is the right decision for our relationship, for our family, for our business, it would take an act of congress to knock us off that position.

Our oldest [child], who’s 12, is becoming a teenager, and Jo and I just realized in our hearts that as much as we love Fixer Upper, as much as we love the honor that we have felt with this show basically introducing us to the country, if not the world, we want to make sure that we’re here for our family during really crucial, pivotal points in its journey.

Although fans are still heartbroken over Chip and Joanna's decision to move on from this part of their lives, news of baby number five on the way has certainly lifted everyone's spirits. And hopefully even more sweet updates like this one will pop up in our social media feeds soon.