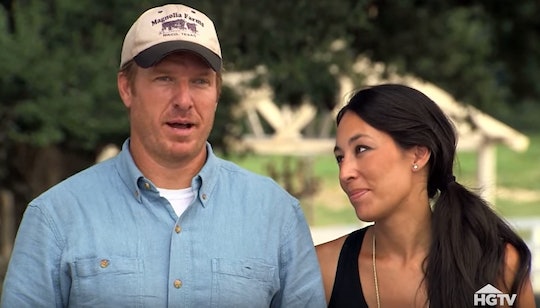 It's finally happened, folks. After months of getting super excited about seeing Joanna Gaines' ever-tasteful baby bump, the moment we've been waiting for is here. Chip and Joanna Gaines just welcomed their fifth child, and fans are obviously going to be pumped about the news. I mean, just thinking about what this baby's nursery is going to look like is enough to get the old heart pumping, you know?

The design duo and adorable couple, who first came to be known to their adoring fans on their home improvement show on HGTV Fixer Uppers, are already the proud parents to four children; 8-year-old daughter Emmie Kay and 11-year-old daughter Ella, 9-year-old son Duke and 13-year-old son Drake. And now they have added one more son into the mix. Chip Gaines tweeted the news of the most recent arrival on Saturday, writing, "And then there were 5.. The Gaines crew is now 1 stronger! 10 beautiful toes and 10 beautiful fingers all accounted for, and big momma is doing great! #blessedbeyondbelief." Which was so sweet, minus all that big momma talk that no woman who has recently given birth ever wants to hear. Let's go ahead and assume that good old Chipper Gaines was just a bit tired or something, shall we?

Fans and friends have been sending messages of congratulations to Chip Gaines ever since they found out the baby had arrived, along with requests to get the name of the new baby. Since Chip and Joanna revealed they were expecting a boy back in March, according to Page Six, we know the name will most likely start with a "D." Unfortunately, no details yet on the baby's name, weight, or details of how Joanna came through the birth, other than the fact that both are healthy.

Joanna Gaines admitted to People back in May that when she initially realized she was pregnant for the fifth time, it came as a total shock to her:

I had been feeling a little emotional and crazy and thought, ‘Wow, this isn’t me.' Then all of a sudden I realized, ‘Hey, I remember this.’ When I saw the results of the test, my jaw dropped. Chip was in the driveway about to leave when I called him back and said, ‘We’re pregnant!’ He was so excited. We’re both just so excited.

She might have been surprised, but the designer and cookbook author has been open about how much she has enjoyed being pregnant at 40. Like the time she shared a picture of herself eating donuts on Instagram with the caption, "This is 40. And I like it... #pregnantandforty #anddoughnuts"

Actually, Joanna Gaines really took pregnancy cravings to a whole new level that one simply cannot help but admire. Beyond having a seriously deep affinity for Fruity Pebbles, she also shared an amazing fast food run that I think I might like to try, pregnant or not, with People:

I even went to four different fast-food places to get four of my favorite things. Fries from one place, chicken tenders from another, soft drink from another place because I love their ice and custard from another. I have no regrets. It was a good night.

I'm going to miss pregnant Joanna Gaines, if only for the excellent junk food tips alone. I suppose I shall content myself with the idea of her spending the summer with her baby at the family farmhouse in Waco, Texas. Probably sipping homemade lemonade and rocking her baby on the porch in a swing Chip built for her specifically. It's not a bad picture, to be honest.