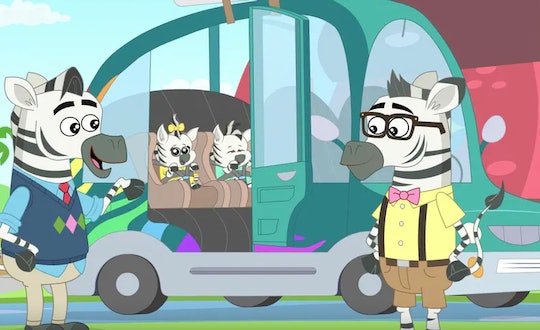 Netflix's fun, inclusive, and creative show Chip and Potato recently introduced gay Zebra parents to the cast in a way that felt exactly as natural and casual as it should. What's more, the beloved children's show has also included gender neutral bathrooms.

Chip and Potato is a Canadian-American production co-produced by Wildbrain that first appeared on Family Jr. in 2018; Seasons 1 and 2 are currently on Netflix. The show features the adventures of a sweet little pug puppy named Chip and her little mouse (secret) friend Potato, who snuggles up in her pocket so she's always on hand to help with any issues Chip might experience, like heading off to kindergarten and making new friends. Also featured on the show are Chip's parents, named Little Momma and Little Poppa, Chip's older brother Spud and little sister Tot.

There are some extra special additions to the Chip and Spud cast of characters in Season 2: New neighbors Roy and Ray Razzle, who are two Zebra dads raising their twins Ron and Ruby, make their debut in Episode 8, according to LGBTQ Nation.

Roy and Ray Razzle aren't the only inclusive nods on Chip and Potato; the little pug also attends the Rainbow Forest School. While this could mean anything, it should hold special significance for families who have adopted the rainbow flag as a symbol of equality and LGBTQ pride. The school even features gender neutral bathrooms, according to Mombian, with identical side-by-side doors with matching rainbow toilet emblems to indicate their use.

Chip and Potato is not the only kids' show to introduce gay characters in ways that feel natural for families trying to promote inclusion and acceptance. Pride compiled a list of 10 animated shows with gay characters, like Adventure Time, Clarence, and Gravity Falls, all featuring gay characters. Inclusion is the way of the future, folks, and kids need to see it practiced everywhere they look.