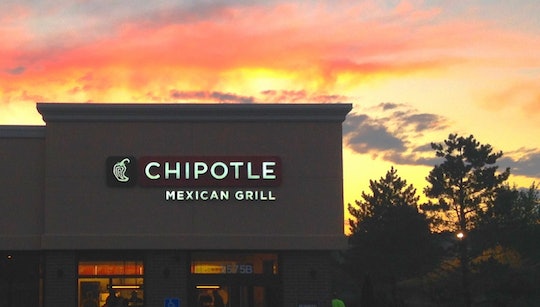 Chipotle Closes Stores Due To E. Coli Scare, And Here’s How to Know If You Might Be Affected

If you want to know if you might be affected by the recent Chipotle-linked E. Coli outbreak, the answer depends on where you live. Since Friday, three cases in the Portland area and 19 cases in western Washington state have been linked to local Chipotle stores, according to NBC News. More specifically, the cases might be connected to only six stores, CNN reports, though out of caution Chipotle has closed 43 stores in Oregon and Washington. In a statement emailed to Romper, Chipotle Communications Director Christ Arnold writes:

The safety and wellbeing of our customers is always our highest priority. After being notified by health department officials in the Seattle and Portland, Ore. areas that they were investigating approximately 20 cases of E. coli, including people who ate at six of our restaurants in those areas, we immediately closed all of our restaurants in the area out of an abundance of caution, even though the vast majority of these restaurants have no reported problems. We are working with health department officials to determine the cause of this issue. We offer our deepest sympathies to those who have been affected by this situation.

If you live in Washington or Oregon, the specific counties where people have reported symptoms include Oregon’s Clackamah and Washington counties, and Washington’s Clark, King, Skagit, and Cowlitz counties, The Seattle Times reported. At least four cases have been reported in King County alone Marisa D’Angeli, a medical epidemiologist with Washington’s department of health, said that while the source of contamination is likely a fresh food producet, they e “very early in the investigation.” D’Angeli encouraged anyone who is sick with intestinal symptoms to see a doctor if they have eaten at a Chipotle since mid-October.

Chipotle’s E. Coli outbreak is limited to a particular region, but just on Sunday, the U.S. Department of Agriculture announced a ground beef recall based on the possibility of an E. Coli contamination. Chipotle doesn’t use ground beef in its products, according to Arnold, so this recall is a separate issue. The ground-beef recall applies to 167, 427 pounds of ground-beef shipped from the Omaha-based All American Meats, Inc, according to The Seattle Times.

Two E. Coli scares in a single weekend seems rather alarming. So how common are E. Coli contaminations exactly? E. Coli is a bacteria that can cause abdominal cramps and diarrhea in affected individuals, and in rare cases, also causes more serious conditions like severe anemia and kidney failure, according to Web MD.  According to the Centers for Disease Control and Prevention, 265,000 cases of ‘shiga-toxin producing’ E. Coli (STEC) infection occur each year in the United States. This particular type of E. Coli is the most likely to cause illness. The most common source of contamination is uncooked or undercooked meat, though raw fruits and vegetables and unpasteurized dairy products or juices are also common sources of contamination. E. Coli is transmitted through feces, so take a moment to ponder what’s sitting on your unwashed produce—or on your own unwashed hands.

265,000 is actually an estimate, because most cases of E. Coli-connected illness go undiagnosed and untreated, according to the CDC, and only 20 percent of reported cases are in connection with an identified outbreak. E. Coli is one of many sources of food-bourns disease. According to the New York Times, 3,000 Americans die each year from tainted food.