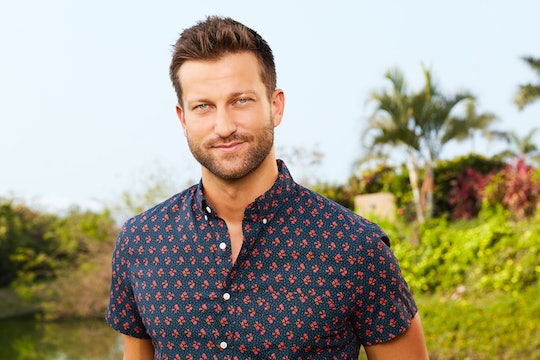 Chris B. Has Officially Been Designated A 'Bachelor' Nation Elder On 'BiP'

The big source of drama during Sept. 2's episode of Bachelor in Paradise was John Paul Jones, Tayshia, and Derek's love triangle, and as Derek tried to process the situation amongst his bros, one of them got a very honorable designation during a cutaway interview. Chris B. "Bachelor Nation Elder" chyron on Bachelor in Paradise left Twitter in stitches, especially since he's the same age as Derek!

Of course, being a six-time Bachelor franchise veteran, holding the record for most appearances, has earned Chris a certain level of gravitas on the show — especially since he came to BiP Season 6 with a more mature outlook on love. He actually seems to be hitting it off in a serious relationship this summer (with Katie Morton, of Colton Underwood's season of The Bachelor), which makes Chris a valuable Paradise sage. He was a natural choice for guidance and mentorship when Derek struggled with a fraught connection, and producers picked up on it, designating him official Bachelor Nation Elder.

"It's going to catch up to him in a bad way," Chris assured Derek after he and JPJ found themselves in a screaming match on the beach the night before.

"The whole Derek and JPJ situation has been tough to see," he added in a confessional interview. "They're fighting over Tayshia and JPJ has gone off the rails completely."

For those of you who need a refresher, Chris B. has appeared on three separate Bachelor franchise shows. Viewers first met him on Emily Maynard's season of The Bachelorette in 2012. Then, he went on to appear on the final season of the short-lived Bachelor in Paradise precursor Bachelor Pad. Then, he "crashed" Andi Dorfman's season of The Bachelorette, getting kicked off set after camping out all night to try and score a spot in the mansion. And, of course, this is his third time on BiP, previously appearing on Seasons 1 and 2. In fact, after the second season in 2015, Chris announced that he was officially "retiring" from reality TV, which definitely seemed like the best thing to do, considering he was earning something of a villainous reputation.

But he spent his time away from TV well. Chris now owns two sports bars and consults on a dating app called Catch. He felt ready to jump back in the saddle as a mature 32-year-old looking for love.

It would appear that his Bachelor franchise journey might be coming to an end, since him and Katie are still going strong, even after he accepted a date card from Jen Saviano just to test the waters. As for Derek, his journey definitely came to an end when Tayshia dumped him. This was his second big heartbreak of the season and it all seemed to be too much for poor Derek, who eventually just sent himself home. I'm sure Chris gave him some wise words for the road and he's probably plotting his campaign to replace Chris Harrison as we speak.