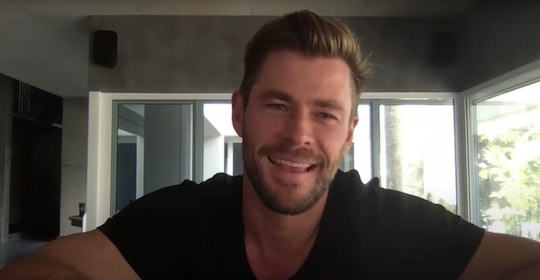 Much like millions of parents around the world, Chris Hemsworth is also struggling with homeschooling his children during the ongoing pandemic. In fact, during a recent video interview from his home in Australia with Jimmy Kimmel, the Thor actor admitted that he's "failing miserably" at his new teaching gig and got real about how difficult it is to suddenly be responsible for his children's education. He's trying to make it work, though he did also admit that he's had to resort to some questionable parenting tricks.

On Thursday, Hemsworth and Kimmel discussed how he and his family are coping with social distancing at home. According to Hemsworth, he and wife Elsa Pataky are in a small coastal town in Australia with their three children, 8-year-old daughter India and 6-year-old twin sons Tristan and Sasha. While Hemsworth explained that social distancing in his part of the world is actually "pretty good here" since Australia has "flattened the curve," when the conversation turned to homeschooling things got a little rougher. When Kimmel asked Hemsworth if his kids were being educated "over the computer," the dad of three answered, "Yeah, over the computer. Meaning they're watching YouTube and stuff."

"I'm trying. I'm failing miserably. It's sort of four or five hours of negotiation and bribery, and then maybe 20 minutes of actual work. If that," the actor said.

This will definitely sound familiar to parents of young kids who have suddenly found themselves at home full time and trying to juggle child care, working from home, and educating their kids. When they had no intention of trying to take over their child's education. No wonder bribery, negotiation, and ultimately, as Hemsworth said, might only get a person about 20 minutes of actual work.

It also doesn't help that school has apparently changed so much over the past several years. Hemsworth told Kimmel, "Everything's changed since I was in school. I was talking to the teacher about it and the adding, subtracting, and so on... it's not quite as straightforward. There are new little tricks and so on which I don't understand."

Not that the busy dad is stressing out about things too much. "I've just relaxed into the idea that they're going to come out of this quarantine, you know, with an IQ a little under par."

Some parents in the United States have chosen not to homeschool their kids during the pandemic because it's simply too stressful to manage right now. Perhaps parents can take a page out of Chris Hemsworth's book and just relax a little and accept that things are pretty difficult at the moment. Listen, if it's good enough for Thor, it's good enough for the rest of us, right?