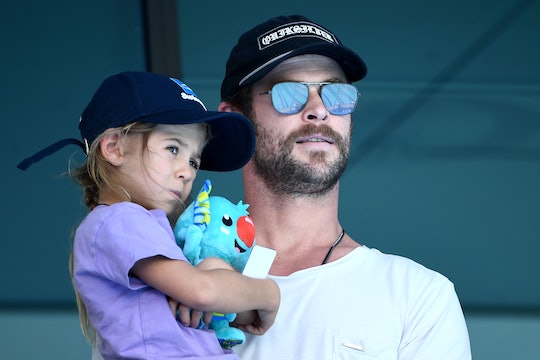 I'm not sure if you ever visited Disneyland's "Tower of Terror" before it closed in 2017, but I did and I'm here to tell you the name is exactly right. It was terrifying. I took my sons once when they were little and I had to wait in the separate shame hallway for chickens because I just couldn't bring myself to do it. But, apparently, the daughters of Norse gods (by way of Australia) are made of sterner stuff than I. In fact, Chris Hemsworth used a hack to make his daughter tall enough for the terrifying Disney roller coaster. And the fact that he did doesn't just prove he's ingenious, it also proves his daughter is something of a bad*ss, if you ask me.

Chris Hemsworth and his wife of nine years, Spanish actress and model Elsa Pataky, are parents to three kids: 6-year-old daughter India and 3-year-old twin boys Sasha and Tristan. While the couple spend most of their time living in Australia, they are also close to Hollywood a fair amount on account of Hemsworth being a big movie star who plays Thor in the new Avengers: Endgame movie and all. Which works out well for the kids because this means they get to visit Disneyland sometimes.

But as Hemsworth told Jimmy Kimmel on Jimmy Kimmel Live! during a recent interview promoting the new film, there was a bit of family drama at the "happiest place on Earth" recently.

As Hemsworth explained to Kimmel, his daughter India was desperate to ride on the "Tower of Terror" a few years ago, which means she would have been about 3 or 4 years old.

"She wasn't tall enough and she was really upset so I was like, 'oh forget this, come here.' So I grabbed a couple of Snickers bars and slid them in the back of her shoes, under her heels," he told Kimmel. "Then we walked back up and I was like, 'Hey, what about now?'"

Apparently no one working the "Tower of Terror" questioned her massive growth spurt in the space of a few minutes and they let her on the ride. I guess Snickers really does satisfy.

That being said, there is obviously a reason for the height requirements on these rides. As Hemsworth pointed out, he and India were strapped in (although the seat was far too big for her) and he was having a little celebration about "beating the system."

Then things changed. As he told Kimmel, when the ride dropped he had to grab on to her and hold her in place while she was "screaming the whole way down."

In the end, he decided that it probably wasn't that great an idea after all...

India was fine, of course, and still apparently feeling pretty brave. Like when she went surfing on her dad's back last March, for instance.

This story of Hemsworth's does seem like a total dad thing to do, if I can generalize shamelessly for just a moment. His daughter wanted to go on a ride and he wanted to give her the thing she wanted. He figures out a hack, everything goes a bit wrong, and he laughs about it later.

Fortunately he has a daughter who sounds like she's up for adventures with him, so all will be well.