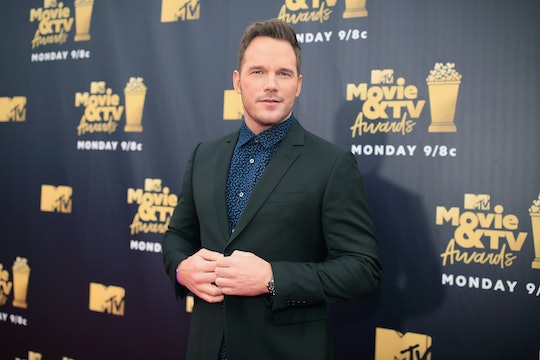 Chris Pratt recently announced on Instagram that he had popped the question to his girlfriend of seven months, so when he recently sat down for an interview with Entertainment Tonight, his big news was naturally a hot topic. Although it's not exactly surprising to hear that Pratt is super pumped about the future, it turns out that Chris Pratt wants "lots of kids" with Katherine Schwarzenegger, and that he already anticipates that marriage will help shift his priorities away from his busy career, and more toward his home life.

Pratt sat down for a chat with the outlet to promote his upcoming film, The Lego Movie 2: The Second Part, and in the interview he spoke about his relationship with his now-fiancée, and told Entertainment Tonight that he felt like "a lucky man." And though his relationship with Schwarzenegger was a bit of a whirlwind — he and ex-wife Anna Faris officially finalized their divorce in November, according to E! News — it doesn't sound like Pratt actually needed a lot of time to realize exactly what he's looking for. When asked how he envisioned his perfect future, Pratt responded, "Lots of kids," and added, "Maybe less time spent working and more time spent enjoying life."

In other words, not only does it seem like Pratt is *so* ready for married life with Schwarzenegger, he also seems totally down to give his 6-year-old son Jack, some siblings. But for now, at least, it sounds like Jack is doing just fine living it up as an only child. Pratt told Entertainment Tonight that he'd had the chance to organize a special screening of his new Lego-themed film for his son and his friends, and said,

Jack loves this movie, he loves Lego. Man, he lost his mind. He was with all his friends, they had a huge dance party afterwards ... [When] we got home he was like, 'Dad, can we see Lego Movie 2 right now?'

Unfortunately for Jack, The Lego Movie 2: The Second Part won't actually be released until February 8 — and if he's looking forward to having a new baby brother or sister to play with, he'll likely have to wait a while for that, too. Although Pratt definitely doesn't seem to have any hesitations discussing his desire for more children, People recently cited sources close to the couple who say that Pratt and Schwarzenegger are currently focused on planning their wedding, and that they both share a strong Christian faith that will likely be "front and center" during the event.

Then again, it doesn't necessarily sound like they will have a long engagement: according to People, Schwarzenegger has reportedly been talking about getting married this summer. And given that they didn't seem to need much time before getting engaged, it makes sense that they may also be ready to get married as soon as they can.

One person who seems to be completely supportive of their swift timeline at least? Faris, who has made it clear that she has nothing but love for her ex and his wife-to-be. For one, Pratt gave Faris the heads-up about the proposal prior to making the news public, and when he did share the news on Instagram, Faris left a comment that read, "I'm so happy for you both!! Congratulations."

But in case there was any doubt about how she felt, Faris spoke in a recent episode of her podcast, Unqualified, about learning that Pratt was about to propose, and said,

Chris texted me this morning and he was like, 'I proposed to Katherine last night. And I was like, 'Ahh, that's amazing.' I texted him back like, 'I just wanted to remind you I'm an ordained minister.'

Although it's probably not all that likely that Faris will, in fact, officiate her ex-husband's wedding, the sentiment at least is super supportive. And given that Pratt and Faris will always share a son together, the fact that they're able to put their own feelings aside and continue to be there for one another is truly remarkable.