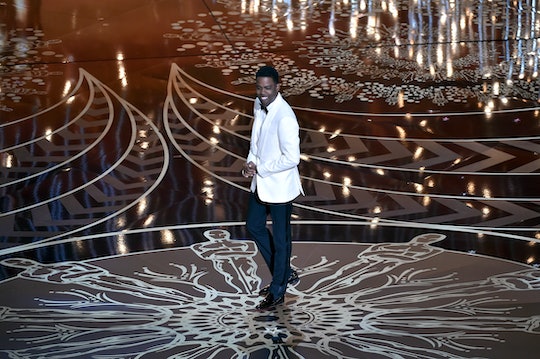 Chris Rock came out swinging for his second stint hosting the Academy Awards. On Sunday, Rock started right off the bat giving the #OscarsSoWhite racism issue plenty of attention through some terrifically biting, on-point jokes that just stacked one on top of another. But, in a surprise moment of awards host activism, Chris Rock’s Oscars monologue highlighted sexism, too. In a hats off to feminists, Rock spoke of the unnecessary — and sexist — separation of male and female awards categories:

You already do it with men and women. Think about it: There’s no real reason for there to be a man and a woman category in acting. There’s no reason! It’s not track and field. You don’t have to separate them.

Rock's astute observation was one of many "drop the mic" moments throughout his devastating opening monologue. He followed his remark with a perfect joke to drive the point home: "Robert De Niro never said, ‘I should slow this acting down so Meryl Streep can catch up.’ No. Not at all."

As the pinnacle of movie-making achievement each year, the Academy Awards must meet its burden to be Hollywood's State of the Union address. The Oscars definitely has a race problem, but Hollywood's got a gender inequality problem, too.

The separate Oscar categories for men and women is one of many invisible forms of sexism in Hollywood. Equally as invisible is the issue of the gender wage gap in Hollywood, although it's largely invisible to your average movie goer, it's all too glaringly obvious among many of Hollywood's leading ladies. At last year's Academy Awards, Patricia Arquette took her acceptance speech time for her Best Supporting Actress win to champion "it's our time to have wage equality once and for all."

In October, Hunger Games and Joy star Jennifer Lawrence wrote about gender inequality in an essay for Lena Dunham's email newsletter titled "Why Do I Make Less Than My Male Co-Stars?" Her piece was widely praised for its unflinching candor in addressing Hollywood's wage gap problem.

Actress Sandra Bullock spoke to Variety after Lawrence's piece took the Internet by storm, noting that sexism extends well beyond the wage gap for women: "I always make a joke: ‘Watch, we’re going to walk down the red carpet, I’m going to be asked about my dress and my hair while the man standing next to me will be asked about his performance and political issues.’" It's not her imagination, either: The #AskHerMore movement challenges the media to cover more than just what women are wearing on the red carpet. Rock addressed this point too, later in his monologue, but despite his earlier feminist observation, these remarks were less so:

Another big thing this year is you’re not to ask women what they’re wearing this year. You have to ‘ask her more’ … Hey everything’s not sexism, everything’s not racism. They ask the men more because the men are wearing the same outfits. If George Clooney showed up with a lime green tux on, and a swan coming out of his ass, somebody would go, ‘What you wearing George?’

While Rock's rant about #AskHerMore might seem to invalidate his earlier comments about sexism in Hollywood, at least the issue is finally start to gain momentum and get the attention it deserves.

He went for it so hard, on so many levels, and in so many directions. If nothing else (and to be sure, so much else), Rock did not take this moment lightly.