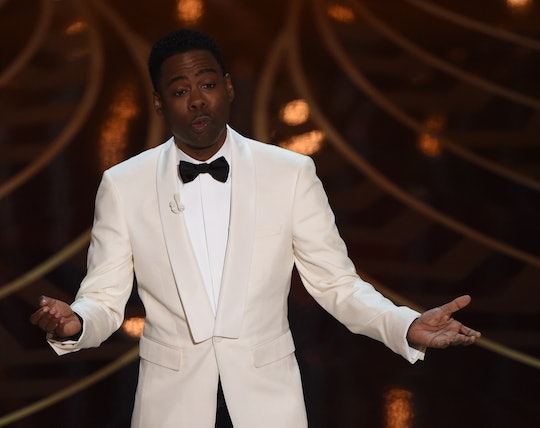 One of the most anticipated moments of the 88th Annual Academy Awards was the opening monologue. It was a chance for Chris Rock, this year's host, to comment on not only the award ceremony itself, but the social discourse of the past (and current) year surrounding Hollywood's biggest night. This year's host seemed completely and fully aware of the potential social implications, because Chris Rock's Oscars monologue was the comedic social commentary we all needed.

It seemed that Rock couldn't care less about receiving awkward claps or haphazard laughs or, sometimes, downright silence — he used his signature laid-back-but-still-kinda-in-your-face comedy to highlight the diversity issue of the Oscars and Hollywood in general. Chris began his monologue by pointing out the Academy's decision to highlight black actors in the opening reel — black actors who were not nominated. He then nailed his first joke like the boss comedian he is.

You realize, if they nominated a host, I wouldn't get this job.

Rock dedicated his entire opening monologue to diversity, the need for Hollywood inclusion, and the racism plaguing Hollywood. By far, the most mic drop-worthy moment was Rock's take on the In Memoriam segment of the Oscars. The joke was met with some silence, an awkward applause, and a whole lot of necessary truth.

But perhaps the most powerful moment of Rock's opening monologue was his honest plea for opportunity. The #OscarsSoWhite hashtag and subsequent movement isn't about whining or requesting special treatment (like, sadly, so many people would have you think). It's about opportunity.

While Rock's comments during his opening speech were powerful and necessary, they weren't all that surprising. Prior to the show, Rock gave the media plenty of room for Oscar monologue speculation, so no one is (or at least, no one should be) surprised that the actor and comedian chose to use this unique opportunity to speak about the diversity issues plaguing Hollywood, as well as the trending and continued issues surrounding the #OscarsSoWhite commentary.

This isn't the first time a host — or Academy Awards presenter — has used the Oscar stage to touch on current social commentary. While black actors present at the Oscars way more often than they win — a phenomenon worth addressing all on its own — black actors and actresses are quick to take the opportunity to speak about social issues that would otherwise be overlooked, on a night that celebrates glamor, excellence, and wealth.

Chris Rock hosted the Academy Awards in 2005, and took the opportunity then as well to speak on the overwhelming need for greater diversity in the industry while explaining why he was initially reluctant to make an appearance on the show. At the 60th annual award show, Eddie Murphy gave an #OscarsSoWhite speech long before it ever became a trending hashtag. Murphy's speech hinged on the disproportionate representation of African Americans during what's probably the most prestigious awards ceremony of the year. He said, "I will give this award, but black people will not ride the caboose of society and we will not bring up the rear anymore. I want you to recognize us."

It's clear that it will take more than an Oscars opening monologue to change the diversity issue of Hollywood, but at least individuals are continuing to try. Hopefully with the continued pressure from hosts, award winners, and viewers alike, the Academy will react accordingly, and more people of color will be honored at the Academy Awards.