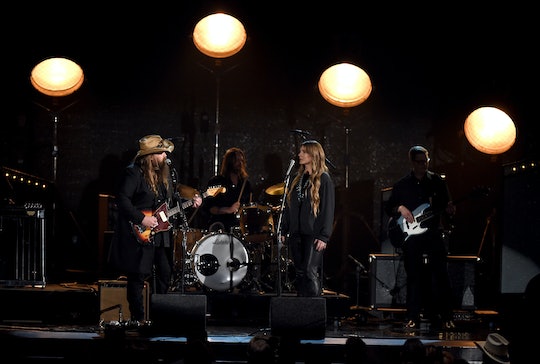 Country music is known for being a little sentimental (overly sentimental, even) but Chris Stapleton singing "Fire Away" with his wife at the ACM Awards was just too much (in the best way possible). After winning Male Vocalist and Song of the Year, the Kentucky native and his wife Morgane Stapleton took the stage for a moving performance of his song "Fire Away." Morgane is also an established country singer, though she wasn't up for any awards at Sunday's show. But she certainly did more than just play backup to her husband. Stapleton told Paste magazine after his latest album, Traveller, was released that if it wasn't for her, "Fire Away" probably wouldn't exist.

It's not the first time the husband and wife have performed together, either. At the Country Music Awards this year, Rolling Stone said that the Stapletons channelled Johnny Cash and June Carter after performing together. At the time, Morgane said that music is what binds them. "It's how we're drawn to each other in the first place, was music. That's our foundation in a lot of ways," she said. She continued, "I don't want to make music without him."

Stapleton feels the same way about his wife's talent, referencing a recent show where he was sick and Morgane helped pick him up. He told Rolling Stone in the same interview, "I couldn't talk the day before the Ryman show, but she was over there pulling me up." He added that's kind of just their vibe, saying, "she does that every time, and vice versa. If she's not feeling it, I can pick up the slack. That's what we do for each other onstage."

Sunday's awards show was all about loving couples supporting each other through music. Stapleton and Morgane, Blake moving on from Miranda Lambert, and even the heartbreaking Joey Feek tribute. These country music stars know how to keep the love alive, and that's something that's always helped give the country industry that touching, wholesome feel. It's refreshing to see music as something that's so integral to who these artists are, and not just the career that pays their bills (though that kind of honesty is still very much appreciated). Maybe it's true that the couple that works together, stays together. If it is, you can definitely guarantee that Chris and Morgane Stapleton would be the picture-perfect example of doing just that. And after listening to "Fire Away," are you really that surprised?