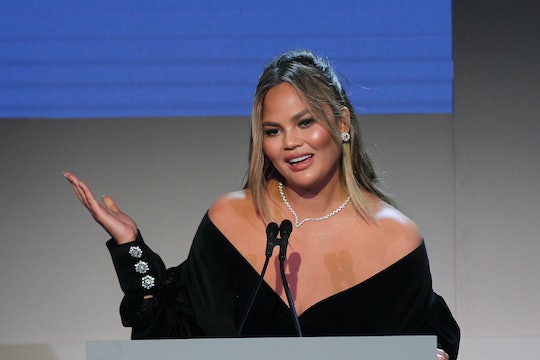 Some moms try to do everything exactly by the book, from making sure to snap a picture of their child every four weeks, to giving the sitter a three-page list of do's and don't's for a one-hour playdate. Then, there are moms like Chrissy Teigen, who is gloriously imperfect as she goes about this crazy business we call parenting. Now, the always-relatable Teigen asks if she can change her baby's birthday & TBH, it's a damn good idea.

As Good Morning America reported, Teigen is mom to daughter Luna, and little Miles, the birthday baby in question.

Having gone through a lot of life change since her babies were born, including postpartum issues and weight struggles, as the news program detailed, Teigen seems determined to use her experience to shine light on problems that haven't always been discussed. But in doing so, she throws out tons of fun, honest parenting conundrums, too.

As Teigen noted on Twitter, tomorrow is the first birthday of baby Miles, her second kid and first son with singer John Legend, Harper's Bazaar reported. But the forecast includes rain, according to her tweet, which is not the best for a cheerful birthday celebration.

"Is it wrong to change your baby's birthday?" the star asked on Twitter. "[I]t's gonna rain tomorrow: (he won't even know right."

Fans got right into the act: "I think you can change their birthdays until they start school," wrote one, while another posted, "I postponed Christmas for a day when we all had the flu. Kids were 2 and 2 months. They just thought Christmas Eve was really long. 😂."

"Too funny," added a third. Needless to say, the support was definitely there.

As most noted, telling a couple white lies as a parent seems to be par for the course. One fan even mentioned stealing MY signature trick of showing the kids the ball dropping in Times Square, while it's still only 9 p.m. in places like California. This is to avoid them wanting to stay up until midnight, and I can confirm it works.

I say, Chrissy should go ahead and postpone Miles' celebration until the sun will be shining again and friends or family won't be afraid to step outside for cake. There's only so much time left for Teigen to get away with tricks like this before both Luna and Miles are old enough to know better.

Of course, Teigen, who's turned her signature sass into a brand all its own, including 24 million Instagram followers and soon, her own lifestyle and recipe website, has a history of prevaricating, along with her other half.

The duo admitted to O magazine that they lied to hold Luna's fabulous third birthday party meeting princesses at Disneyland. See, it wasn't on the actual day due to their busy work schedules.

As Legend admitted on social media: "Luna had a Disneyland birthday today! (As far as she knows, her birthday is today. Don't tell her it's Sunday please. Daddy has to work on Sunday. Thank you."

If they did it for Luna, they can do it for Miles!