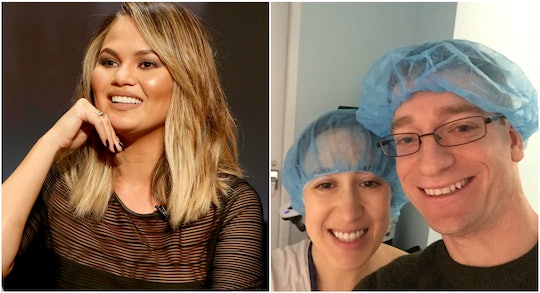 Chrissy Teigen "Chose" The Sex Of Her Baby, & So Am I

"And would you like to know the sex?" My nurse asked me. I paused, unsure of what to say. The gender reveal is usually an exciting moment for parents-to-be, but there was one problem with me learning the sex. I’m not pregnant yet. Not even close. Instead of an ultrasound technician waving a wand over my stomach, I was fully clothed and sitting in my living room for this conversation. Our IVF fertility nurse had called to tell me the results of our PGD (preimplantation genetic diagnosis) test, which included learning the gender of our frozen embryos.

When it comes to fertility treatments, there’s probably nothing more controversial than the idea of “designer babies.” Parents in the future may be able to choose the sex, eye color, hair color, and more. While we’re not there yet, more and more couples are electing — and are even encouraged by their doctors — to get genetic screening as part of the IVF treatments.

If we had the option not to pass the disorder along to our future kids, we wanted to do it... Learning the gender early was just another part of the testing process for us.

“Genetic carrier screening is highly recommended for all patients prior to conceiving to avoid an inheritable genetic disease in their child,” says Dr. Mark Trolice, a reproductive endocrinology and infertility specialist in Orlando, tells me. “However, some fertility clinics are very aggressive in offering/encouraging [testing] to their patients. This is an area of intense debate in the reproductive medicine world.”

Currently, there are two screening tests available: PGD and PGS. The two serve different purposes. “PGD enables people with an inheritable condition to avoid passing that condition on to their children,” Dr. Trolice explains. “Preimplantation genetic screening (PGS) refers to techniques where embryos from presumed chromosomally normal genetic parents are screened for aneuploidy (having chromosomal regions or numbers present in extra or fewer copies than normal).”

In other words, the PGS screening can help prevent doctors from using an abnormal embryo. For women who have had multiple miscarriages, PGS can be extremely helpful in getting them safely pregnant.

In our case, my husband and I chose to get our embryos tested through PGD because we’re both carriers of the same rare genetic disorder. If we had the option not to pass the disorder along to our future kids, we wanted to do it. The screen also included PGS to make sure we were getting a genetically “normal” embryo. Learning the gender early was just another part of the testing process for us.

There’s another side to the debate, though. Some couples that have a preference for one sex over the other are choosing to screen their embryos just for the sake of learning the sex. Or, a family that already has several boys, for example, may screen their embryos if they are trying to have a girl. It’s an expensive option, costing between a few hundred and up to $5,000, depending if your insurance will cover any of the tests — but most don’t.

“It’s still quite limited to the number of couples who are interested in gender selection,” says Jason Flanagan, a certified genetic counselor in South Dakota. “That said, when couples ask, I just go through the process of what’s involved and trying to get a better sense of why they are wanting to make this decision. In many cases, the reasons are very reasonable and thought out. For example, they want to carry on the family name and there are no males on their side of the family.”

Most famously, Chrissy Teigen made waves with her first pregnancy back in 2016, with her now 1-year-old daughter, Luna. On Twitter, Teigen announced she was specifically choosing to implant a female embryo. Through elected PGS screening, she found out the sex early. She told People magazine, "Not only am I having a girl, but I picked the girl from her little embryo. I picked her and was like, 'Let's put in the girl,'" she said. "I think I was most excited and allured by the fact that John would be the best father to a little girl."

Some of her followers were quick to criticize her decision for having a preference for one sex over the other, though. People were also upset she was choosing expensive fertility treatments over adoption. Teigen fiercely defended her decision, saying that she and husband, John Legend, plan to use all the embryos eventually. “I am not mad at anyone's beliefs but I don't really actively seek out people to make them feel bad about their decisions either,” she wrote.

True to her word, Teigen and Legend are now pregnant with their second child, who they already know is a boy. But it wasn’t announced without controversy. "Since this is coming up again, I said our next baby would be a boy because that is the embryo we have left," she wrote on Twitter recently. "A boy. So. Yeah."

While I wasn’t personally worried about insulting my roughly 30 followers on Twitter with a preference for one gender over the other, I still felt a bit weird about the whole thing.

It turns out, it’s rare in most of the world to be debating the sex selection issue at all. The practice of IVF sex-selection is banned in Canada, Australia, the UK, and parts of Europe, except in the case of medical issue. Even in the United States, fertility clinics can decide not to screen for sex, even though it’s perfectly legal.

“It is still very controversial to offer PGS to couples just for gender selection. In fact, many IVF centers will not do PGS for gender,” Flanagan explains. “That said, this stance has softened in the recent few years. Some IVF centers will do it for ‘family balancing.’ Meaning, if you have a girl, they will let you select for a boy or vice versa.”

While I wasn’t personally worried about insulting my roughly 30 followers on Twitter with a preference for one sex over the other, I still felt a bit weird about the whole thing. Of course, I wanted to learn the sex — eventually. I could have chosen to wait until we were pregnant. But caught up in the moment, I told the nurse to tell me. (Side note: I’ve heard of other couples finding out accidentally — it’s written on their test results when they didn’t want to know. Clinics, that’s not OK!)

I felt guilty for having a preference at all. I also didn’t want to get attached to the idea of having a girl or boy when so much can still go wrong with fertility. Remember, I’m not pregnant yet!

Like Teigen, we ended up with one healthy boy embryo and one healthy girl embryo. While my husband and I want to have multiple children and fully plan to use both embryos (they can remain frozen indefinitely until we’re ready) we still had to make the decision on which embryo to implant first. And that’s where it got more complicated. I felt guilty for having a preference at all. I also didn’t want to get attached to the idea of having a girl or boy when so much can still go wrong with fertility. Remember, I’m not pregnant yet!

Ultimately, I realized that so much has been out of our control for the past two years while trying to conceive; it felt good to be able to make a call for once. Also, I considered birth order and what I considered best for our family in the long run.

“Genetic testing is complicated,” Flanagan says. “There is more to think about than just the results.” It’s such a complicated process; in fact, most couples are assigned a genetic counselor to walk them through all the options and steps. Ultimately, the decision to learn the sex is your own, though.

My husband had zero preference one way or the other — he just wants a healthy baby. In the end, we implanted one embryo, which didn’t take, and are now planning on implanting the other — so for us, thinking about the sex of our future child has been a diversion in a complex and at-times challenging fertility process. Yes, we got to "decide," but every couple who encounters this quandary knows that choosing is ultimately an act of hope.

More Like This
Home Reno Culture Makes Me Feel Like I Live In A "Before" House
I’m Getting Dual Citizenship For My Jewish Children, Just In Case.
I’m A Mom Who Will Never Own A Home
How Much Hair Loss Is Normal? 9 Signs You’re Losing Too Much Hair